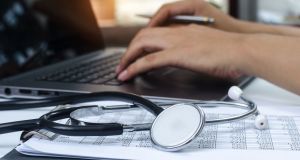 The doctors voted by 94 per cent in favour of industrial action. File photograph: iStock

Public health specialists, who are playing a key role in dealing with the Covid-19 pandemic, have overwhelmingly voted for industrial action, up to and including strikes, in a dispute over pay and contracts.

The doctors, who are represented by the Irish Medical Organisation (IMO), voted by 94 per cent in favour of industrial action. They will decide on Monday on the nature and timing of any strikes or industrial action.

The IMO said it would then advise the HSE and the Department of Health “so that engagement can take place on emergency cover during industrial action”.

The organisation said it was deeply regretful that specialists in public health medicine were being forced to take this route.

“The absence of any proposals from the Department of Health since the ballot was announced was indicative of the department’s lack of respect for the medical workforce and its lack of urgency on public health medicine even during a pandemic,” it said.

Minister for Health Stephen Donnelly has said he is committed to the establishment of a consultant-led public health model.

It is understood the department has proposed that about 80 consultant posts in public health medicine be established and that these positions could be advertised early next year.

The department, it is understood, has suggested the new public health consultants would be paid on the terms of a new public patient only contract. The department submitted a business case to the Department of Public Expenditure on its proposals in mid November.

Public health specialists currently earn about € 113,000. Hospital consultants with an existing type-A contract - which permits them to treat only public patients - have a pay scale that ranges from €141,026 to €195,653.

However, it is understood the public health doctors are concerned Government proposals may not see all existing public health specialists automatically upgraded to consultant positions but rather having to compete for posts as they come on stream.

The Cabinetin September approved the introduction of legislation which would allow the Government to increase pay for certain groups, which it saw as a key requirement to deal with the public health specialists issue.

However, the doctors maintain they still have not received any specific proposals and the enabling legislation has not yet been enacted by the Oireachtas.

This legislation is expected to be brought before the Oireachtas by the Department of Public Expenditure next month.

Dr Ina Kelly, chairwoman of the IMO’s public health committee , said the action was part of “a fight for the future of public health medicine in Ireland.

The Department of Health said the establishment of new consultant posts in public health medicine was a priority for the Minister. It said it hoped that the issue could be resolved through engagement with the IMO under the provisions of the current public service agreement and that industrial action could be avoided.