Garda honoured for rescuing woman from fast current in river 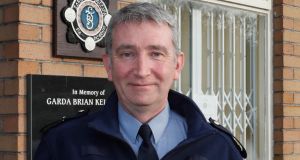 Sgt Cathal O’Neill said: “I saw the woman go past me in the river, adjacent to the park, so I went into the river and I was able to wade in most of the way, but then I lost my footing and had to paddle a bit, but I was able to grab hold of her and pull her back to riverbank.” Photograph Liam Burke/Press 22

A garda was honoured on Friday for rescuing a woman from a raging river in Co Limerick, 17 years after saving a teenage boy from a burning house.

Sgt Cathal O’Neill, Croom Garda station, was on mobile patrol on August 31st last year, when he got an alert over his radio of a woman entering the Maigue River in Croom.

The Cork city native who was first emergency services responder at the scene, saw the woman being carried past him in the fast current.

Using his knowledge of the area he went ahead of the semi-unconscious woman and was able to rescue her.

On Friday he received a Seiko Just In Time award for his heroism, presented by Water Safety Ireland.

Recalling the dramatic incident, Sgt O’Neill said: “I saw the woman go past me in the river, adjacent to the park, so I went into the river and I was able to wade in most of the way, but then I lost my footing and had to paddle a bit, but I was able to grab hold of her and pull her back to riverbank.

“She was semi-unconscious but once I got her back to the bank, she came to, and an ambulance arrived quickly after that and they looked after her.”

Paying tribute to him, Supt Magner said: “I am proud to serve as a member of An Garda Síochána alongside people like Cathal, his bravery and dedication knows no bounds.”

“He has taken our mission statement of ‘Keeping People Safe’ to another level,” she added.

In February 2003, at the height of an outbreak of violence between feuding gangs in Limerick city, Sgt O’Neill, then a young garda, saved a 16-year-old boy who was trapped in an upstairs bedroom of a house that had been fire-bombed.

“I was part of an armed patrol in Moyross and we came on a house at three o’clock in the morning that had been firebombed. There was a 16-year old boy trapped in an upstairs bedroom, and I went into the house, assisted by two members of the ERU (Emergency Response Unit),” said O’Neill, who was attached previously to the Limerick Garda headquarters, Henry Street station, as well as at Roxboro Road.

“The boy was strapped upstairs so I ran up and got him and pulled him out through the window and lowered him down to the two ERU members, and then I lowered myself down,” he explained.

“We brought the boy’s mother out through the front of the house. The firebomb had gone in the front door and the stairs was on fire, so the fire was around the stairway and hallway, so we had to make a bit of jump through (the flames).”