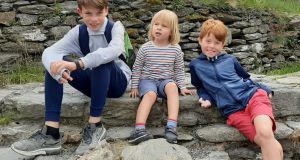 Liam (10), Johnny (4) and Patrick Howard (7). Their father Brendan is worried they will not be able to attend the same school due to the end of sibling-first admission policies at their local school.

Johnny Howard (4) lives just around the corner from the school which his older brothers Patrick (7) and Liam (10) go to.

His father Brendan said the family always assumed the children would go to the same school – until this week, when the family received a letter to say Johnny had not been offered a place at the school. It is the result of an end to sibling-first admission policies across Catholic primary schools in the greater Dublin area.

The school in question, Our Lady’s Grove, like many schools in the area, is oversubscribed and about more than 40 children are on its waiting list. About a dozen of them – including Johnny – have siblings in the school.

“Whoever came up with this policy doesn’t understand the practicalities of day to day life for working parents,” Brendan Howard said.

“Part of our consideration when we moved to this area was there was a local school in walking distance. So, when we heard about the end of the sibling-first policy, it just sounded mad.

“We don’t have a plan B. If he can’t get in, we’ll have to try to find another school if there is one. It could mean getting another car; trying to get to two schools in rush-hour traffic. New uniforms, school books, additional voluntary contributions.

“Or do we take our two older children out of their school to join him, with all the disruption that would cause? I can’t see who this benefits. It’s not something that parents are requesting . . . it’s just causing lots of stress and hassle for parents.”

The mother of another child at the school, who declined to be named, said she was worried that another one of her children will not have any school place next year.

“He is number 31 on the waiting list [for the school], so I am very worried,” she said.

Her son is down on waiting lists for two other oversubscribed schools where, she says, he is even further down the list.

“He is due to finish his second year of preschool next year. He will be five, finished preschool, and not able to go to primary school to join his sister . . . it just doesn’t make sense.”

Mr Howard, meanwhile, is hoping his son will get a place in subsequent rounds of offers, on foot of other children not taking up their school places.

“At the moment, we’re naively, maybe, hoping he will still get in. We don’t want to think about what it could mean if he doesn’t. It would be hugely disruptive and stressful for everyone.”