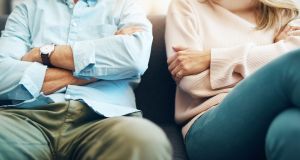 One mediator noted that ‘the system we have has this enormous cost’. File photograph: Getty

The institution of marriage was changed fundamentally by the introduction of divorce 25 years ago but the law’s attitude towards spousal maintenance has not kept pace, according to a leading family law expert.

The margin in favour of the removal of the constitutional prohibition on divorce was less than 10,000 votes in the November 24th, 1995 poll, which came at the end of a bitterly divisive national debate.

“Hello divorce, bye bye daddy”, was the famous phrase used by some who campaigned against the change.

But in the years afterwards the feared flood of divorces failed to materialise and wives have tended to seek divorce more often than men.

Last year there were 4,073 applications to the courts for divorce, a 5 per cent increase on the previous year.

There were 3,545 divorce orders made, almost all in the Circuit Court; eleven were made by the High Court, where higher value divorces are heard. Only eight applications were refused.

“What we have seen in the period [since the referendum] is further changes in the societal and personal landscape of Irish families that resulted in a more secular Irish society,” says solicitor and family law expert, Geoffrey Shannon.

One of the matters he believes now requires a fundamental review, is the issue of maintenance, which is still operating according to laws that date back to 20 years before the referendum.

“In the context of divorce, what you have is the marriage ceases, but your obligations continue indefinitely,” he says. “No single concept alone can govern the system of maintenance, yet we have a system where the focus is on lifelong spousal maintenance.”

A couple might only be married for four or five years, and have no children, yet the Irish system presumes the possibility of one spouse having a lifelong financial obligation towards the other.

“Really what I am saying is that the payment of maintenance between former spouses should facilitate a smooth transition from dependence to economic independence, ensuring that the dependent spouse is provided for until he or she is self-sufficient.”

Maintenance should be calculated in a way that reflects the duration of the marriage, and the commitments that are required.

Shannon also believes it would be a good idea to introduce a statutory recognition of prenuptial agreements, about which Irish law is silent. This is a matter of particular concern in rural Ireland, where the family farm is such an important asset.

He believes that the law should allow for the development of prenuptial agreements that are “valid and enforceable to the extent that they support and foster the interests of children and spouses”.

The judiciary would still be allowed a wide discretion in making orders as to the reordering of assets in the context of divorce. Prenuptial agreements should not be determinative, says Shannon.

Prenuptial agreements allow couples “when they are on very good terms to agree on how the assets might be re ordered in the event of the marriage breaking down”.

Shannon believes that if there were “clear and applicable guidelines” for the courts when it comes to making the orders that follow upon the granting of a divorce, then more people would be inclined towards mediation, as against litigation, because it would be more evident what the outcome of any litigation was likely to be.

Another area where he believes improvement could be made is in relation to giving a greater voice to children.

Research shows that “the children who make a relatively good adjustment to divorce are those who feel that their views were taken into account when the parents got divorced”.

Divorce can cause children “an emotional shock that is akin to bereavement. We need to be alive to that fact, and to minimise any trauma that is caused to children”.

“We have a habit of talking about the children as chattels,” says Shannon.

Roisín O’Shea, of Arc Mediation, studied law and became a mediator in the wake of her own separation proceedings in 2008, which she says cost her €55,000 in legal fees.

She believes the length of time it takes, and the legal costs involved, are factors in explaining Ireland’s relatively low rate of divorce.

“The system that we have has this enormous cost” and often the fees have to be paid out of the proceeds of selling family property, she says. “We have a really poor approach to the problem of people coming apart.”

Inge Clissmann, a senior counsel who has long experience of working in family law cases, believes that there are cultural reasons for Ireland’s relatively low divorce rate.

“I think there is a greater willingness to make an effort. And there may be that old adage from the Christian faith: for better or for worse.” Over the years she has noticed a move in the courts towards taking a more “pragmatic” approach to divorce applications, as well as a change towards men wanting to be more involved with their children.

“There are still people who have religious objections to divorce, but they are few and far between these days,” she says. Clissman believes “people are more alert now to the importance of shielding their children from the possible damage that can be done” when divorcing.

However, in some instances “a spouse can feel that she has nothing else to hit back with, that her only leverage, or bargaining chip, is the children”.