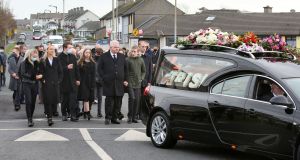 Patricia Carrick’s husband Damien and family members during her funeral at Mervue in Galway on Friday. Photograph: Joe O’Shaughnessy.

Patricia Carrick was “dignified in her fight for cancer, her fight against cancer,” her husband Damian Carrick told at her funeral Mass on Friday.

The mother of four was diagnosed with cervical cancer after a previous smear test was incorrectly read and died on Wednesday at the age of 51.

“Trish was a great mother to our four children, she was a teacher, a counsellor, a referee, a taxi driver, a cook, and a listener. She was a mother, a kind loving mother,” Mr Carrick said.

Her children will “carry her spirit with them as they weave through life”, Mr Carrick told mourners at the Holy Family Church Mervue, Co Galway.

Ms Carrick was one of the more than 200 women affected by the CervicalCheck scandal, and last month received a State apology in the Dáil over the health service’s failures in her case.

“She insisted that we ask women that they look after their bodies, so that they do not have to endure what Trisha endured, and for those women of today, to be the mothers of tomorrow” Mr Carrick said.

Paying tribute to his wife he said: “If you are familiar with the musical Cats you will know that Grizabella, the shabby old cat that sings Memory towards the end of the musical, is chosen by the jellicle old Deuteronomy to take the journey to the heavy side lair, to be reborn into a new jellicle life.

“Trish has now started a journey to the heavy side lair, but her memory will live on with us forever.”

Mr Carrick added: “Trish loved music and singing and sang that song many times. The first line of the song is ‘Midnight, not a sound from the pavement has the moon lost her memory, she is smiling alone’.

“Trish is smiling now, but she is not alone.She is with our little angel baby Aishling Marie and her mother Maura. ”

President Michael D Higgins was represented at the funeral by Col Stephen Howard and the Taoiseach Micheál Martin by Comdt Caroline Burke .

Ms Carrick’s siblings recited the prayers of the faithful, after which her sister Anne said: “All I can say is I find it hard to believe that I am standing here, on the alter of the Holy Family Church, where my sister and the rest of my family attended mass, Trisha had her first confession, she made her first holy communion and she got married...But the reality is, she is still in front of me in a coffin.

“Her death is senseless, when is all this going to stop. How many more lives have to be lost before it stops because it was unnecessary.”

She added: “I am upset but I am also angry.”