La Maison: Donegal design duo who have rolled with the changes 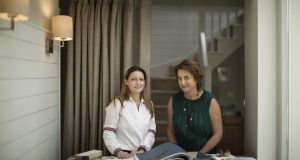 In 2005, as the Celtic Tiger roared, friends Anne Blake and Claire McDonough gave up safe jobs in Donegal County Council to open an interior design and specialist gift store in Letterkenny.

Back then, both believed that there was a local market for their store, La Maison, concentrating on quality homeware and wedding gifts in a time when consumer spending was running high.

Blessed with a good eye for colour and design, neither had much, if any, retail experience, though they spent two years before they quit the local authority researching.

For the first few years the shop flourished, and it introduced Donegal’s first online wedding gift registry, but that promising start began to slow in 2007 as the first signs of trouble began to emerge.

“Firstly we quickly realised we needed to offload as much stock as possible. We had a huge storeroom full of Villeroy & Boch china,” says Blake. Soon, they realised that La Maison was only going to stay open if they diversified.

So they retrained, while still juggling the demands of the shop and motherhood. Some days, customers found Blake’s infant daughter Annie sitting in a car seat in the shop. Needs must.

By late 2007, they’d retrained as interior designers, which allowed them “to slowly steer” away from retail and “harness our design skills through consultancy and manufacturing”, says McDonough.

You know when you’re doing something right, when competitors follow. In the business world you are either a sheep or a shepherd

“We did this slowly, building relationships with trusted partners, hiring a skilled and creative team of designers and curtain makers. We wanted to rebuild without borrowing money, so we took our time,” she tells The Irish Times.

Conscious that many customers were no longer flush, they offered DIY classes. “We introduced furniture-painting, lampshade-making, and seasonal décor workshops.

“These were so popular with people and most definitely helped us keep the business open during the leanest year,” says Blake. “ There was a huge increase in DIY.”

Slowly, the business not only survived but began to get stronger. Later, they held offbeat Christmas decor workshops. Today they are common, but they were not a decade ago.

“You know when you’re doing something right, when competitors follow. In the business world you are either a sheep or a shepherd,” laughs Blake, remembering old battles.

Ten years on, they have taken another major decision to operate solely as a design studio, manufacturing with six employees in the same shop where they first sold wedding gifts.

When the first Covid lockdown struck, they used the time to refurbish the premises into a new studio and to design a new website that will be the platform for the business in the years ahead.

“We are very excited about the future. We feel we have put our Covid time to good use. We are very flexible, used to adapting and pivoting, so whatever happens, expect to see La Maison flourish,” says McDonough.