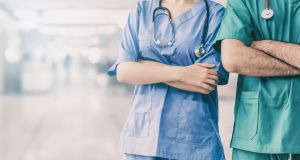 The IMO said it would consider a number of position papers ‘following which further engagement will take place’. Photograph: iStock

Talks are to continue in the coming days between the Government and public health specialists to resolve a dispute and threatened strike over pay and contracts.

The doctors are to consider new position papers put forward by the Department of Health for public health medicine following a new round of talks on Wednesday.

The public health specialists, who are represented by the Irish Medical Organisation (IMO), deferred a series of scheduled work stoppages earlier this month due to the surge in Covid-19 cases. However, they said they would review their position at the end of January.

Public health specialists currently earn about €113,000. Hospital consultants with an existing type-A contract – which permits them to treat only public patients – have a pay scale that ranges from €141,026 to €195,653.

The Department of Health proposed to the Department of Public Expenditure and Reform before Christmas that about 80 public health consultant posts should be created, filled by open competition, earning between €189,000 and €227,000 annually.

Key issues for the current process are likely to include not only the pay rate to apply but also whether all existing specialists would be moved automatically and immediately to new contracts or whether the introduction of such new posts would be on a phased basis.

The Department of Health said the talks considered “a pathway towards a reformed public health model in Ireland and related matters”.

The IMO said it would consider a number of position papers “following which further engagement will take place”.