Representatives say domestic travel not enough to sustain tourism sector, and viability of many businesses could be in doubt 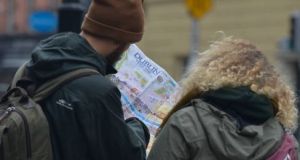 “In a normal year about 75% of the revenue for the tourism economy actually comes from the international tourists.” Photograph: Getty Images

Domestic customers alone will not be enough to sustain Ireland’s tourism businesses, industry figures have warned, and the viability of many could be put into question if visitors from abroad stay away for another year.

Eoghan O’Mara Walsh, chief executive of the Irish Tourism Industry Confederation, said it was important for the sector that overseas travel into the State resumed in the second half of this year.

“We do want the tourism economy to reopen, and hopefully the domestic market will be able to consume the tourism product from the summer onwards,” he said.

“We’re still hopeful of overseas tourism but probably in quarter three and quarter four of this year. The thing to remember is the domestic market is not strong enough, not big enough or robust enough to sustain the tourism industry here.”

There are 20,000 tourism and hospitality businesses in Ireland, according to Mr O’Mara Walsh, who said a domestic market of 5 million people was not big enough to support all of them.

“In a normal year about 75 per cent of the revenue for the tourism economy actually comes from the international tourists. It’s very important that we actually do get the international aviation open in a safe manner later this year.”

Mark McGowan, managing director of Scholars Hotel in Drogheda, Co Louth, said the absence of international tourists would hit businesses in the north and east of the country hardest.

“What has been shown from the summer time is everyone went south and west, so Drogheda was a dead town. Louth in general was dead,” he said.

“The whole region suffered really badly, with everybody heading off to the west coast. We would be very concerned about the second quarter of this year because we rely on [international tourism] every year and we never expected for two seasons to be gone.”

“Not taking anything away from the domestic market, but it tends to be quite a short season. It tends to be July and August really, whereas the international market tends to be a lot longer from the start of May until the end of September.”

He said another year without overseas visitors would be “devastating” for the businesses who rely solely on international customers, and he hoped restrictions on international travel continued in “only a worst-case scenario”.