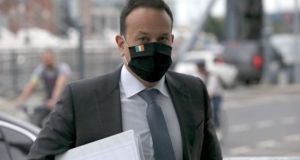 Leo Varadkar is said to have cautioned against saying the next group to be vaccinated is the over-70s, as it will be older age groups (ie over-80s) that get vaccinated first. Photograph: Stephen Collins/Collins Photos

Tánaiste Leo Varadkar has said up to 100,000 vaccinations are expected to be administered each week during the month of April as roll-out ramps up.

He told a private meeting of the Fine Gael parliamentary party on Wednesday night that the next few months will be “grim” but he is “optimistic” about the summer.

Sources also said Mr Varadkar told the meeting that there’s a possibility people will be able to book vaccination appointments by June or July.

The meeting also heard concerns from some participants, such as former tánaiste Frances Fitzgerald, Kildare TD Bernard Durkan and Senator Jerry Buttimer that the new Covid-19 restrictions on international travel - announced on Tuesday evening - do not go far enough.

It is understood no-one explicitly argued for a so-called ‘Zero Covid’ strategy to be adopted, but there were calls for more stringent measures around mandatory quarantine for people travelling into Ireland.

Mr Varadkar told TDs and Senators that he was “quietly confident” that, with the number of Covid-19 cases falling, schools will begin a phased reopening starting with special needs children in mid-February.

He said Minister for Education Norma Foley and Josepha Madigan, the Minister of State for Special Education, are working on the matter but “we’re not there yet”.

Mr Varadkar offered the latest projections on the vaccine rollout.

He said the European Union is taking a hard line in demanding that Astra Zeneca honour its contract with the EU amid the row over the shortage in vaccine supply.

The AstraZeneca vaccine is expected to be authorised for use by the European Medicines Agency (EMA) on Friday, which would allow Ireland to start using it from next week.

Mr Varadkar is said to have cautioned against saying the next group to be vaccinated is the over-70s, as it will be older age groups (ie over-80s) that get vaccinated first.

He said current projections are for 1.1 million doses of various vaccines to be delivered by the end of March, another 1.5 million in April and as much as two million in May.

Mr Varadkar stressed these are the current estimates and could change.

Approval of new vaccines and their delivery schedule could impact on the projections.

The meeting was told that vaccinations will ramp up in April, when GPs and pharmacists are expected to administer between 75,000 and 100,000 does per week.

There are to be eight vaccination centres set up in cities and towns, with smaller facilities elsewhere.

However, he said the Government decided to extend that until March 5th to align with measures in Northern Ireland.

Mr Varadkar said that international travel accounts for less than 1 per cent of Covid cases in the country.

He told colleagues that he would not rule out any strategy to deal with the pandemic as the virus continues to present new challenges.

Measures taken in the last year, such as closing pubs and schools, would not have been countenanced before but action had had to be taken.

Mr Varadkar said that “humility” is required when tackling Covid-19.

He said that, if conditions allow, the country may go from Level 5 to Level 4 - or Level 4 with modifications - similar to the gradual way the country emerged from the first lockdown last year.