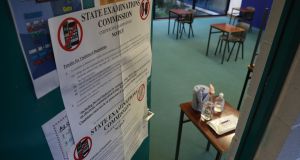 The Government is to examine alternative options for assessing Leaving Cert students when consultations with education partners are completed, Taoiseach Micheál Martin has said.

He was commenting as students’ and teachers’ representatives met with Department of Education officials on Wednesday to discuss a range of possible alternatives or modifications to the Leaving Cert.

Mr Martin said the Government was acutely aware of the “enormous stress and anxiety” facing Leaving Cert students and that options will be presented soon on a way forward.

He said Minister for Education Norma Foley was consulting with student representatives, the State Examinations Commission and other education stakeholders over the exams.

“The Minister will come back in a comprehensive way to present options for the Leaving Certificate students of this year,” he said.

He said that Ms Foley would make an announcement “when it’s right”, following the completion of these consultations.

Mr Martin was responding in the Dáil to questions from Sinn Féin leader Mary Lou McDonald who called for students to be given a choice between the exams or receiving grades based on work they have completed.

She said this year’s sixth year students were “doubly disadvantaged” because their studies had also been hugely disrupted during fifth year.

They should have the option “to sit the traditional exam if that is possible in the summer time but to have the choice of a continuous assessment and grading system” as an alternative, she said.

Ms McDonald told the Taoiseach he was now “honour bound” to make clear to students that a level of choice would be granted.

“Any pretence now that we will have business as usual come this summer has absolutely zero credibility,” she said.

A meeting between Ms Foley and education stakeholders took place on Wednesday which included an “exploration of further possible options” for the exams, according to a Department of Education spokesman.

Themes around “alternatives and possible impact on the student experience” were discussed, he added.

A further meeting of the advisory group – which includes representatives of students, parents, teachers, principals and school managers – is due to take place on Friday.

The Irish Second-Level Students’ Union (ISSU), which attended the meeting, said afterwards that it had emphasised the need for students to be given a choice between calculated grades or sitting a version of the Leaving Cert.

Reuban Murray, the ISSU’s president, said a poll of 20,000 students published last week showed that just 4 per cent want the Leaving Cert to go ahead as planned.

“We were very clear that students need to be given a choice between calculated grades and sitting the exams – that was clearly communicated,” he said.

“Simply modifying the Leaving Cert is not fair and it’s not what the student body wants. It might work for other stakeholders, but not for us.

“Students’ education has been badly disrupted. There are very real mental health concerns. Some students are in direct provision or homes where they don’t have the support to engage. They need a choice.”

Teachers’ unions, however, have said they remain hopeful that the exams will go ahead in some form in the summer and are not keen on assessing their own students.

Earlier on Wednesday, the Labour Party called for an “assessed grade” model to be offered to all Leaving Cert and Junior Cycle students.

The party’s education spokesman Aodhán Ó Ríordáin TD said such a system was the only “realistic option” in light of disruption to students’ education.

“It’s time to make a decision and give parents and students across the country some certainty regarding this year’s exams,” he said.

“The reality is, the class of 2021 have missed 14 weeks and counting of in-class tuition. They continue to experience massive disruption to their education, and with schools covering the curriculum in different stages, the Labour Party is calling for assessed grades for this year’s Leaving Cert.”