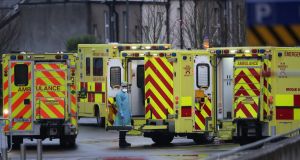 A medic in PPE stands amid ambulances outside the emergency department at the Mater hospital in Dublin. Photograph: Niall Carson/PA Wire

A sevenfold increase in the number of Covid-19 outbreaks within family homes is noted in the latest figures on clusters of the disease.

There were 69 new outbreaks in private family homes in the week to January 23rd, up from nine the previous week, the Health Protection Surveillance Centre reported. This is the highest number of outbreaks within families reported since Christmas.

The majority of outbreaks in the third wave of the pandemic have been in homes. Some 1,307, or 52 per cent, of the 2,503 outbreaks reported since late November have been in private houses.

The number of new outbreaks reported in hospitals, nursing homes and residential institutions declined during the week, while the number in childcare facilities doubled to 28.

There were 20 new outbreaks reported in hospitals, down from 37 the previous week with 88 new cases linked to those outbreaks, a reduction from 116.

There have been 139 outbreaks in hospitals since November 22nd and 116 remain open. There have been 1,140 lab-confirmed cases linked with the hospital outbreaks, of which 21 were admitted to intensive care units and 106 died.

An outbreak is defined as two or more cases of the disease and it remains open until 28 days have passed without a new positive case being detected.

There have been 193 outbreaks in nursing homes, community hospitals and long-stay residential units since November, with 4,096 associated cases, of which 262 people have died.

There were 36 new outbreaks detected in workplaces, down five on the previous week. Ten were in the commercial sector and six each in meat processing and offices.

There were 11 new outbreaks notified within the Traveller community, with 62 cases linked to them. This brings the total cases reported in the community to 468 in the third wave. Some 18 were hospitalised with the disease with fewer than five ICU admissions and deaths being reported.

There were two new outbreaks reported in direct-provision centres with 42 new cases notified, bringing the total number of cases in these centres to 133 during the latest wave of infections.