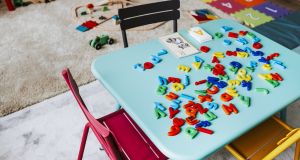 Siptu has said that nearly half of childcare workers are actively seeking another job due to low pay levels in the sector. Photograph: iStock

Nearly half of childcare workers are actively seeking another job due to low pay levels in the sector, the trade union Siptu has said.

The union said that its annual survey of early years professionals found that 90 per cent of workers in the sector struggled to make ends meet.

Darragh O’Connor, Siptu’s head of strategic organising and campaigns said in a foreword to the report that just 22 per cent of early years educators earned more than the Living Wage of €12.30 per hour.

He said that only 11 per cent felt valued as front-line workers by the Government and 74 per cent found find work during Covid-19 to be stressful or very stressful.

“These conditions have consequences; 38 per cent of all professionals are actively looking for a job in a different profession. This rises to 44 per cent for room leaders where most graduates are employed. “

The survey also found that, 77 per cent of staff in the sector had no work sick pay scheme and just 10 per cent received paid maternity leave from their employer.

Mr O’Connor said that poor pay was “by far the biggest issue driving people out of their profession”. He said 80 per cent of respondents to the survey cited it as their top concern.”

“Hundreds of millions of euros are spent each year by the State to improve quality and drive professionalisation, including the education of graduates and continuous professional development. However, until pay and conditions are addressed the State is simply trying to fill a bucked with many holes.”

The survey of about 2,000 staff in the sector was completed in late 2020 by social scientist Dr Amy Greer Murphy.

Dr Greer Murphy said: “This research shows that the early years sector is facing a crisis due to Covid-19, with 74 per cent of workers finding their work stressful in these difficult times.”

“However, many of the issues workers experience – such as low pay and insecure contracts – are not new. With 93per cent of respondents stating they will leave the sector within 5 years if conditions don’t improve, this research clearly indicates that these professionals need better pay, job security and to be valued more by government and society.”

Early years educator Eilish Balfe said: “I hold a Level 8 degree and I have dedicated the last 13 years to working in early years yet I have received just one pay rise during that time. How can we attract school leavers into a sector that is known for poverty pay and conditions?

“Our sector is near collapse due to the exodus of qualified professionals in search of better pay and conditions. The pandemic has shone a light on our sector which shows that we need to be recognised and valued as essential frontline workers.”