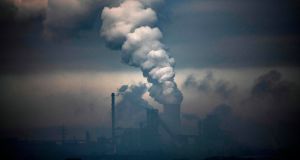 The biggest ever opinion poll on climate change has found two-thirds of people think it is a “global emergency”.

The survey shows people across the world support climate action and gives politicians a clear mandate to take the major action needed, according to the UN organisation that carried out the poll.

The UN Development Programme (UNDP) questioned 1.2 million people in 50 countries, many of them young.

Even when climate action required significant changes in their own country, majorities still backed the measures.

In nations where fossil fuels are a major source of emissions, people strongly supported renewable energy, including the United States (65 per cent in favour), Australia (76 per cent) and Russia (51 per cent).

Where the destruction of forests is a big cause of emissions, people supported conservation of trees, with 60 per cent support in Brazil and 57 per cent in Indonesia.

Overall, the most popular actions to tackle the climate crisis were protecting and restoring forests, followed by renewable energy and climate-friendly farming. The promotion of plant-based diets was the least popular of the 18 policies in the survey, with only 30 per cent support.

Gender was a factor in some countries, with at least 5 per cent more men and boys saying there is a climate emergency than women and girls in 16 countries. However, in four nations – the US, Australia, Canada and the UK – significantly more women and girls were concerned about global heating.

The UNDP ran the “Peoples’ Climate Vote” in 50 high-, middle- and low-income countries, representing more than half the world’s people. Experts at Oxford University weighted the replies to reflect the population of each nation.

“If 64 per cent of the world’s people are believing in a climate emergency then it helps governments to respond to the climate crisis as an emergency.

“The key message is that, as governments are making these high-stakes decisions, the people are with them.”

Ms Flynn said the survey connects the climate concerns of people, particularly the young, with governments at a time when accelerated action must be agreed, in particular at a UN climate summit in November. The climate crisis continued unabated in 2020, with the joint highest global temperatures on record.

“We are at a fork in the road and the poll says ‘this is how your future generations are thinking, in specific policy choices’ – it brings a way to envision the future,” she said.

The poll found the highest proportion of people saying there is a climate emergency was in the UK and Italy, both at 81 per cent. Australia was at 72 per cent and the US at 65 per cent, the same as Russia, and India was at 59 per cent. Even the lowest proportion, in Moldova, was 50 per cent.

The relatively low support for the promotion of plant-based diets may be because there are few plant-based options in some countries or people may have felt that diet is more of a personal choice, said the UNDP. Support was highest in Germany (44 per cent) and the UK (43 per cent).

The reason why more men and boys said there was a climate emergency than women and girls in countries such as Nigeria and Vietnam may be because girls have less access to education in those places.

The poll found that the more education a person had completed, the more likely they were to think there is a climate emergency. Why more women and girls are more concerned in the four English-speaking nations is unclear.

The poll was distributed via advertisements in video games and puzzles, including Angry Birds, Subway Surfers, Sudoku and Words With Friends, and this particularly helped reach younger people.

The idea came to Ms Flynn when she was on the subway in New York City: “I looked around and everyone was on their phones and most were playing games.”

The data was collected between October and December 2020 and, despite the coronavirus pandemic, 59 per cent of the people saying there is a climate emergency also said the world should “do everything necessary and urgently” in response.

Prof Stephen Fisher at Oxford University said: “The Peoples’ Climate Vote has delivered a treasure trove of data on public opinion that we’ve never seen before. Recognition of the climate emergency is much more widespread than previously thought.” – Guardian