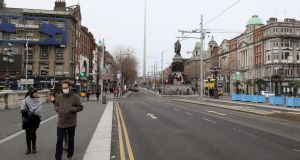 Announcing on Tuesday an extension of the Level 5 lockdown to March 5th, Taoiseach Michéal Martin said a Zero Covid approach is not ‘possible or sustainable’. Photograph: Brian Lawless/PA Wire

Additional quarantine and travel restrictions and tougher enforcement of measures announced by the Government on Tuesday will not be sufficient in suppressing the virus, according to a group of scientists and academics.

Members of the Independent Scientific Advocacy Group (ISAG) reiterated during a webinar on Wednesday their view that a “Zero Covid” strategy aiming to eliminate the virus must be adopted if the country is to avoid yo-yoing in and out of lockdowns.

Prof Aoife McLysaght, a lecturer in genetics at Trinity College Dublin, said that while there were certain aspects of the new measures she found “encouraging”, she feared they could lead to a false sense of comfort.

“The discouraging thing is that what they did yesterday is not going to work, and the fear is they think they have done something,” she said. Quarantining at home where family or flatmates are exposed to the virus is “not quarantine at all”, she said.

Her biggest concern, she said, is that there doesn’t appear to be a public health strategy beyond March 5th, when the current Level 5 lockdown is due to end.

“Even if they were to say our target is to get to Level 1 [restrictions] until the vaccine is completed. That is a defensible position,” she said.

However, she said there is now huge support from the public for adopting ISAG’s elimination strategy. Increasingly opposition politicians and even some dissenters within Government parties are coming out in favour of Zero Covid, she said.

The Government announced a series of quarantine and travel restrictions and tougher enforcement of existing regulations on Tuesday, including new checkpoints near the Border.

ISAG is calling for a public health strategy that would seek to eliminate community transmission of the coronavirus on the island of Ireland. Cases must get to below 10 per day at which point they must be aggressively pursued “like a murder” with swift contact tracing and testing, the group says. The scientists and academics point to countries such as New Zealand, Australia, and South Korea where citizens are now going about their daily lives with very few restrictions.

Announcing on Tuesday an extension of the Level 5 lockdown to March 5th, Taoiseach Micheál Martin said a Zero Covid approach is not “possible or sustainable”.

“It is a promise you could never fulfil. Once you reopen again the prospect is there for reseeding the virus,” he said.

He also poured cold water on the notion that measures could be put in place to stop any cases of the virus entering the State via Northern Ireland.

Julien Mercille, an associate professor of Geography and Planning at UCD and a founding member of ISAG, laid out what he believes is a “pragmatic” plan for managing the border between Northern Ireland and the Republic, if an all-island solution cannot be found.

Border “bubbles”, which would work as buffer zones either side of the actual border, along with a permit system that allows holders to move around within these bubbles would work to prevent cases from re-entering the Republic, he said. A “containment line” a few kilometres south of the border should be policed with checkpoints, he said.

This method would also be replicated within the Republic if an area of the country experiences an outbreak of the virus. These outbreak areas, or “red zones”, would also be surrounded by buffer zones, which would in turn be bordered by a further “sentinel” zone, where sewage testing and other checks would catch any viral overspill, he said.

Issues regarding people who travel between the two jurisdictions for work could be addressed by engaging with specific industries to devise workable plans. Professor Mercille said this border management would only be effective if community transmission is much lower than it is at present.

Recognising that dual approaches within the island is a “silver medal” solution, he said he still believes his proposition is “feasible with political will”.

“The best solution is not to have a border management approach. It is to have a one-island cooperation . . . That would be so much easier,” he said.

Associate professor of international health and tropical medicine at the Royal College of Surgeons, Sam McConkey, said politicians must approach these North-South public health negotiations as they did with Brexit.

“What we need is diplomatic consensus building, where compromise becomes the thing we are looking for ,” he said, adding the Irish government and Northern Ireland Executive must realise they have a “common agenda”. The lack of political will is the biggest barrier to an all-Ireland approach to the pandemic, he added.

Modelling by the National Public Health Emergency Team (Nphet) and shared with the Government shows that average cases per day will be between 800 and 1,400 by February 8th, and will drop to between 200 and 900 by the end of next month.

Prof McConkey said there is no “chronological” answer to reopening after this current lockdown as the rate of decline might change. However, he guessed it would take around two to three months to get cases down to single digits at which point restrictions could begin to ease.

There are further responsive measures, such as addressing crowded rented accommodation 14-day quarantine for all incoming travellers, rapid testing and contact tracing, testing of casual contacts, that could accelerate suppression, he said.