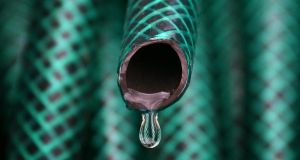 The Water Abstractions Bill proposes users register water usage if they take more than 25,000 litres of water a day from rivers, lakes and groundwater sources through wells, boreholes or pipes. Photograph: Gareth Fuller/PA

A proposed overhaul of water extraction legislation in Ireland demanded by the European Commission will not regulate heavy users sufficiently, according to environmental groups.

A majority of water abstractions will remain unmonitored and unregulated, including agricultural and commercial abstractions, they warn in response to the findings of an Oireachtas committee report.

It concludes daily thresholds proposed for registration and licensing in the Water Abstractions Bill are far too generous and must be reduced.

An Taisce and the Sustainable Water Network (Swan) have called for the recommendations of the Committee on Housing, Planning and Local Government to be adopted in full by the Government.

The draft Bill proposes that users register their water usage if they take more than 25,000 litres of water a day from rivers, lakes and groundwater sources through wells, boreholes or pipes. But the committee says registration should be applied at 10,000 litres.

The Bill is designed to track water usage and to identify rivers and other sources under environmental strain, taking into account future supply impacts.

Natural environment officer with An Taisce Dr Elaine McGoff said the Bill as drafted was far too weak and “will not only fail to achieve what the Water Framework Directive (WFD) legally requires, it will also undermine the requirements of several other key pieces of EU environmental legislation, with significant risks to wildlife”.

She added: “Water scarcity is going to become an increasingly important issue, and if we don’t get this legislation right now we’re going to pay for it later. It’s our collective national resource, and it’s in everyone’s interest that it is properly managed and regulated from the get-go. Everyone needs access to clean water.”

The committee had drafted up a solid set of recommendations which, if implemented, would shore up a series of fundamental flaws in the draft Bill, she believed.

This legislation applies to those abstracting ground or surface water for domestic, agricultural and industrial use. It proposes, among several problematic things, to allow 100 times more water to be abstracted without a licence in the Republic compared to Northern Ireland, she said.

“This legislation is necessary and timely, but it is vital that Ireland gets this legislation right to minimise risks of over-abstraction and protect the water environment and future water supply, particularly with more frequently occurring droughts as a result of climate breakdown,” An Taisce said in a submission.

It will have major implications on plans to extract water for drinking purposes, including the proposal to take water from the Shannon. Irish Water plans to pipe 350 million litres a day to serve parts of the midlands and the greater Dublin region – a part of the country under most water stress due to increasing demand, overreliance on the Liffey, high levels of leakage and climate disruption including increased droughts.

Registration means extractors would be subject to inspection while licensing would also require environmental impact assessments to be carried out to which, the committee concludes, the public should have an input.

Last year, Swan warned the Bill was in breach of key EU environmental directives including the WFD; a view later echoed by the Office of Parliamentary Legal Advisers.

Swan co-ordinator Sinéad O’Brien said: “The proposed Bill is very much light-touch regulation and, very simply, would fail to comply with EU law. As it stands, the Bill is a long way off providing meaningful controls of the extraction of our most precious resource.”

It sets exemption thresholds “so ridiculously high” that the majority of water abstractions would remain unmonitored and unregulated, she added.

“Over-abstraction of water creates all sorts of risks for the local environment including potential depletion of wetlands and damage to biodiversity. With climate change and likely future droughts, we will see increased water shortages; we must closely monitor and regulate our water resources now, to protect them for the future,” Ms O’Brien said.

The Bill sets thresholds for registration and licensing significantly higher than comparable jurisdictions such as Northern Ireland and Scotland, despite claims it would “mirror” them, she said.