New pay agreement for 340,000 public service staff to be formally ratified on Tuesday 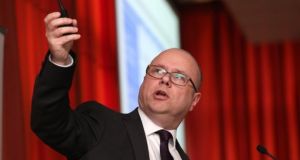 The new public service pay deal for about 340,000 State employees will be formally ratified by trade unions on Tuesday.

Fórsa, the largest public service union, on Monday announced that its members had overwhelmingly backed the proposed agreement in a ballot.

Given the deal has already received the backing of other larger public service representative organisations such as Siptu, the Irish Nurses and Midwives Organisation and the primary school teachers’ union, INTO, it has more than sufficient support to secure ratification when the overall public service committee of the Irish Congress of Trade Unions meets to consider the issue on Tuesday.

Fórsa said that 96 per cent of the 39,457 members who participated in its ballot backed the proposed new agreement.

The deal, which was negotiated between Government representatives and the public service trade union movement in December, will cost an estimated €906 million spread over 2021, 2022 and 2023.

In addition a new independent body will be established to examine the additional hours without additional pay introduced for groups in the public service under the previous Haddington Road agreement in 2013.

A fund of €150million is being established to cover any operational costs that will arise as a result of the recommendations on the future of these hours during the lifetime of the agreement. These additional hours have become a major issue of contention for a number of key unions in the public service over recent years.

Fórsa general secretary Kevin Callinan said the new agreement would underpin stability in the delivery of public services this year and next.

“I believe Fórsa members have given their strong endorsement to this agreement because its pay provisions are substantially weighted towards workers on lower incomes, and because it includes a mechanism to address the additional working hours introduced for lower-paid public servants during the last financial crisis. This is long overdue, not least because restoration has already been achieved for higher-paid staff who experienced temporary pay cuts as an alternative to added hours.”

“Fórsa will now work to ensure that the agreement is fully implemented, and that it delivers for those who use and provide public services. It is a relatively short two-year agreement, which means negotiations on a possible successor will likely commence in the middle of next year,” he said

The proposed agreement was rejected by members of the second level teachers’ union, ASTI, the Irish Medical Organisation and the organisation representing medical laboratory scientists. The leadership of the Teachers’ Union of Ireland strongly urged its members to vote against the proposed deal. However it has not yet finalised a ballot on the agreement.

Organisation representing State employees outside of the Irish Congress of Trade Unions -- such as gardaí and Defence Force personnel -- have complained they were effectively shut out of the final negotiations on the new agreement despite earlier assurances from Government that they would be involved.