Coronavirus: 686 new cases and one further death reported as 14,229 more vaccines given 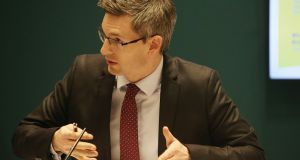 The number of Covid-19 cases among hospital workers fell by two-thirds in a single week in February, while the number of outbreaks fell by three-quarters.

High levels of compliance with public health guidelines have having a positive effect on hospitals, where were 269 cases in healthcare workers up February 14th, compared to 839 the previous week, according to deputy chief medical officer Dr Ronan Glynn.

The number of outbreaks hospital outbreaks fell from 15 to four over the period, he said.

One further death of a Covid-19 patient has been reported by the National Public Health Emergency Team (Nphet). This brings to 4,137 the total number of deaths in the pandemic.

Nphet also reported 686 confirmed cases of the disease, bringing to 215,743 the total number of cases in the Republic.

On Monday morning, 726 Covid-19 patients were hospitalised, down 18 on the previous day. This included 156 in ICU, down eight. There were 33 additional hospitalisations in the past 24 hours.

“In time, vaccination will be our most powerful tool against Covid-19 and over the coming weeks those who are highest risk in our families and communities will get vaccinated.

“For now, each of us has a range of tried and trusted tools at our disposal - by keeping our distance, washing our hands, wearing face masks and staying at home we will continue to drive down transmission of this disease. Our collective efforts move us closer to the continued re-opening of our schools and the resumption of non-Covid healthcare services.”

The 14-day incidence of the disease now stands at 240 cases per 100,000 people nationally. Offaly has the highest county incidence, followed by Dublin and Galway.

The usual Monday night Nphet briefing is not taking place today due to a scheduling conflict for officials with the Cabinet sub-committee meeting.

Earlier the HSE chief executive said visits to other households to watch sports matches or for a cup of tea, rather than large parties, were responsible for increasing Covid-19 cases among younger people.

“We are seeing growing cases now in younger people, from all the evidence we have it’s not house parties,” he said.

People were visiting other households “to see football games, Superbowl, a Premiership match, even people moving between homes for a cup of tea, just having that quick catch up,” he said.

Mr Reid said those types of visits between households were “the real risk factor”, given current transmission levels.

He added that explaining the continuing spread of the virus was “never one single issue”, and down to a number of different factors.

Younger people currently make up a significant portion of the new cases confirmed in recent weeks.

Some 51 per cent of the 11,570 cases reported in the 14 days up to midnight on February 20th were people under 35 years of age, according to figures from the Health Protection Surveillance Centre (HPSC).

The emergence of new variants of Covid-19 in the country, such as the Brazilian strain identified in recent days, was a cause for concern, Mr Reid told Newstalk Breakfast.

The State was on course to administer one million vaccine doses to people a month from April onwards, if supplies ordered arrived on time, he said.

It was projected that 1.24 million people would be vaccinated in the first quarter of the year, followed by 3.8 million people between April and June, he said.

Senior Ministers will meet on Monday to finalise a revised Living with Covid-19 Plan ahead of a full Cabinet meeting on Tuesday.

Minister for Justice Helen McEntee has said the introduction of mandatory hotel quarantining for arrivals into the country will be ready in “three to four weeks”.

Ms McEntee said legislation for the measure needed to pass through the Dáil and Seanad, which she hoped would take place in the next two weeks.

She said she recognised people felt hotel quarantining was not being introduced as quickly as people wanted.

The Government would “give as much clarity as possible” on the new Living with Covid-19 plan on Tuesday, she told RTÉ radio’s Morning Ireland.

Reducing the number of Covid-19 cases was the most important goal, he told RTÉ radio’s News at One.

Dr Ryan said the Government did not have many options while the number of cases remained at current levels, adding there was no point exiting lockdown only to lurch back into another one.

Ireland was on a downward curve and it was really important that people “hold firm”, so that the vaccination programme could be rolled out, he said.

Dr Ryan said the vaccination programme would cause a decrease in deaths and hospitalisation for vulnerable groups. He said there was no question that all of the vaccines offered protection, but it remained unknown if they stopped transmission.

Until there was certainty that the vaccines could offer protection from transmission of the virus it would be necessary to maintain certain measures “for some time,” he said.