One-third of population not staying within 10km of home 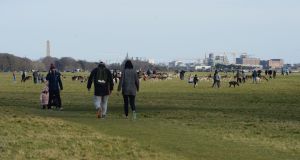 Sunday in Dublin’s Phoenix Park, where warmer temperatures and a longer stretch of light in the evenings saw an increase in visitors. Photograph: Alan Betson

People in every single county in Ireland are increasingly travelling further than 10km from their home, according to new data identifying “some relaxation” in adherence to Covid-19 restrictions.

It has found that one-third of the country’s population are not staying within 10km of their homes and the level of adherence to Covid-19 restrictions has been decreasing during February.

However, the large majority of the country continues to stay bunkered down – 66.7 per cent remained within the 10km zone analysed between the weeks ending February 5th and February 12th.

The SLI data is a seven-day rolling average of travel patterns taken as the public is continually urged not to move around where possible in order to contain coronavirus spread.

The largest decrease in mobility adherence for the latest week of data was Roscommon at 2.9 per cent.

Dublin continues to be the county with the highest percentage of the population staying local (79.7 per cent). While this is a relatively high rate of adherence, the CSO notes it reflects the urbanised nature of the capital and its relatively superior access to services compared with other counties.

However, while the data shows an increase in distances travelled for the week, things have generally levelled off. Broader analysis shows that between January 6th and February 12th, the percentage of the population “staying local” remained between 65.6 per cent and 68.7 per cent.

The Staying Local Indicator (SLI) is based on analysis of anonymised, aggregated, mobile phone activity records, according to the CSO.

It says data from Three Ireland is collated from anonymised data sets at a macro scale, aggregated at electoral division and provided to the Department of Health. No personal data is provided or analysed.

“The outputs from this analysis provide important insights for decision- makers and the public in the midst of the global pandemic,” it says.

While this data looks at volumes as opposed to distances travelled, it found that during January with Level 5 restrictions, traffic crossing the city’s canal cordon remained “at a consistent 55 per cent to 59 per cent” of pre-Covid volumes.

Cycling volumes held steady during December but have since decreased to the levels last seen in April.

Although bus passenger numbers grew to a sizeable 50 per cent of pre-pandemic levels during the Level 3 measures in December, they have since fallen to about 23 per cent and remain static.

The AA said that nationwide data sources have demonstrated that while lockdown three is busier on the roads than lockdown one, they remain far quieter than what would be considered “pre-pandemic normal”.

Spokesman Barry Aldworth said major routes are currently experiencing traffic volumes at about 60 per cent of pre-pandemic levels. Today, however, traffic is about 50 per cent higher than the levels of the first lockdown.

This latter comparison is explained by various factors differentiating the two periods of domestic travel restrictions – no cocooning among older people; a 5km distance as compared to a 2km distance; and more active businesses.

“We expected lockdown three to be busier than lockdown one and that’s the case,” said Mr Aldworth. “The sense we get from speaking with gardaí is that people are [generally] doing what they are supposed to be doing.”

However, on Sunday the AA monitors did pick up on increased traffic levels around Dublin hotspots, notably the Phoenix Park. Mr Aldworth explained that this was not necessarily an indication of rule breaking as many thousands of people live within 5km.

Over the weekend it emerged that such surges in public movement could see Garda personnel redeployed to supervise popular locations and discourage crowding, particularly as the country emerges from a winter of tough restrictions with little let up in sight.

The Office of Public Works said the Phoenix Park was “extremely busy” on Sunday with all car parks “near capacity” by lunchtime.