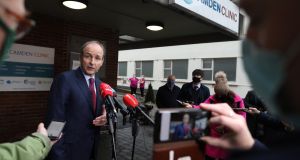 Taoiseach Micheál Martin said there are many benefits and opportunities inherent in the protocol for Northern Ireland.

New structures must be developed to underpin British-Irish relations after Brexit, the Taoiseach has said, with more work needed to ensure reconciliation between different traditions on the island of Ireland.

Speaking at the 60th plenary session of the British-Irish Parliamentary Assembly, which was held virtually on Monday, Micheál Martin said there was a need to deepen co-operation on a range of challenges, from climate and biodiversity to recovery from Covid.

“We will need to develop structures to underpin this engagement, with regular meetings by heads of government at ministerial and senior official levels in order to build relationships and deliver on agreed programmes of work”.

Mr Martin said that the UK’s departure from the European Union is a “moment of dramatic and profound change” which requires both the UK and Ireland “to rethink and reinvigorate the British-Irish relationship”.

Speaking after it emerged on Sunday that the Northern Ireland Protocol would be subject to a legal challenge by the Democratic Unionist Party (DUP), Mr Martin said “there are many benefits and opportunities inherent in the protocol for Northern Ireland”, and urged all parties to “work closely together to ensure that the protocol works, and that disruption is minimized to the greatest extent possible”.

He said, however, that more needed to be done “collectively in order to ensure a full reconciliation between all communities and traditions on this Island”.

“Reconciliation is the core goal of the Good Friday Agreement and is of fundamental importance for our future on this island,” he said.

Pointing to the planned opening of an Irish consulate in Manchester, and joint reviews of collaborations between Ireland, Wales and Scotland, Mr Martin nonetheless said that change brought about by Brexit represented “serious new complexities and challenges”.

“There is no version of Brexit that does not mean change,” he said.

Andrew Rosindell MP, who along with Cavan-Monaghan TD Brendan Smith is co-chair of the BIPA, said that the assembly had “come a long way” since it was established in 1990 and had been “an important mechanism for strengthening inter-parliamentary relations” between Britain and Ireland.

He said he hoped that the BIPA can “grow from strength to strength, and these ties can be deepened even further”.

Mr Smith said the current situation in Britain and Ireland, as both face into a post-Brexit future, and grapple with the recovery from the Covid-19 pandemic, shows there are “urgent challenges facing us as parliamentarians”.

He said the work of the assembly “is of profound importance for our two countries,” yet said that despite the scale of the challenges, they are “not as great and prohibitive as they were in 1990”.

Mr Martin said that the significance of the UK exiting the European Union “has been somewhat overshadowed”, and that the British departure from the bloc had now ended what was “for many decades… an important thread”.

He said, however, that “shared history and heritage”, family ties, interconnected economies and the joint stewardship of the Good Friday Agreement remained.

“We need to think afresh about how we can renew and strengthen those connections,” he said, having lost the daily interactions on shared policy agendas that characterised joint membership of the EU.

He said both countries should be “ambitious” about what can be achieved to deliver “real and meaningful benefits to all our people”.

He urged that the countries “reset and refresh our cooperation in the post Brexit context”.

The Taoiseach said that the Brexit deal, and the Northern Ireland protocol, offered a “settled basis on which to found and develop the European Union and UK relationship”.

During a session with the UK ambassador to Ireland and the Irish ambassador to the UK, Lord Reg Empey, the former leader of the Ulster Unionist Party, asked what the “practical engagement mechanisms” between the two countries would be after Brexit.

Adrian O’Neill, the Irish ambassador in London, said that there was a “lot of reflection and discussion” on the issue going on, and while he wouldn’t pre-empt the exact formats, he suggested there were precedents in the shape of intergovernmental structures between Britain and Germany, France and Poland, which allowed for regular summit meetings between prime ministers and other cabinet members.

Paul Johnston, the British ambassador, said there were significant opportunities in reacting to climate change, including the development of offshore wind programmes. He said Brexit also showed the importance of the Common Travel Area (CTA). Mr O’Neill said that both countries had “discovered” the CTA during the Brexit process, finding it was “much more multifaceted and complex than many of us thought”.

“It’s also about access to public services, education, social security services, health services and the right to work in our respective labour markets”.

He said the CTA “is a key enabler of cooperation and good relations between our two countries”.

Responding to a query from Lord Alf Dubs, Mr Johnston said that the UK was committed to its international obligations arising from the murder of Belfast solicitor Pat Finucane, after the British government decided last year not to order a public inquiry into the killing.

“We’re committed to meeting our international obligations in respect of the case. If that means that there’s an ongoing requirement for further work, we will do that further work,” he said.

The case is currently being reviewed by the Police Service of Northern Ireland and the police ombudsman, he said. “We have not excluded the possibility of doing a public inquiry. It’s not on the table at this stage, but it is not excluded,” he said.