Niamh Kelleher and Jack Cakehead were selected from thousands of applications 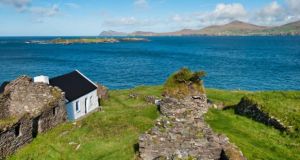 A young couple who made a vow to themselves that they would one day visit one of the most remote Irish islands are to see that dream come true.

Niamh Kelleher, 25 and Jack Cakehead, 24, are to become the new caretakers on the Great Blasket Island, which has attracted thousands of applicants since it opened as a remote tourist destination.

Niamh, from Kilfinane, Co Limerick and Jack from La Rochelle in France, who moved there with his family from the UK when aged eight. beat thousands of hopeful applicants to secure their much coveted stint.

Jack explained that: “The summer after we met, two years ago, we did a road trip along the Wild Atlantic Way. Of course, this led us around the Dingle Peninsula which was one of our favourite sections of the trip.

“Unfortunately, we weren’t able to make the crossing to the island that day but when we stood facing it from the mainland, we vowed to ourselves that we would be back,” despite knowing the island is subject to wild weather conditions and has no running water and electricity.

There are no permanent residents on the island, which was deserted in the 1950s because emergency services were unable to reach it in storms.

That same year, for Jack’s birthday, Niamh gave Jack a copy of The Islandman and Peig’s Reflections, which they both really enjoyed reading and only made their desire to visit the island stronger.

“On top of that, we both love adventure and being in nature and this job really seems to encompass both of these things, so when we first heard about it we were instantly drawn to it.

“The main thing we hope to get out of our time in the Blaskets is lifelong memories of what we are sure will be an absolutely unique experience.

It is hoped that the couple will be able to begin their roles as caretakers in May — Covid-19 restrictions dependent.

Despite living in two different countries Covid-19 restrictions on travel have not proved to be the primary reason they have had to stay apart — it has been Brexit.

“Funnily enough, Brexit has affected us more than Covid. I’m in France and Niamh in Ireland but this is in order to get my residents’ permit organised since Brexit has happened, not because the pandemic has kept us apart,” revealed Jack.

“But we are definitely looking forward to getting away from the Covid chaos. We imagine that we won’t be hearing much news with no electricity which will be refreshing.

“Covid-19 will most likely have an impact on when the cottages are actually able to open for guests and probably when or how the cafe opens. But from what we’ve heard from Billy and Alice, there are already a lot of bookings so we will still have our work cut out.”

The couple plan to work hard and bring a positive attitude above all else. “But also huge amounts of enthusiasm for the island and its history. We have both read a lot of the literature that came from the island so have an appreciation for the sort of lives its inhabitants lead,” said Jack.

“At the moment we are still far too excited to be nervous but we will probably start to feel the nerves as the start date gets closer. We are absolutely delighted with the news. We are still in a bit of a state of shock that we actually got the job but obviously we are over the moon.”

Billy O’Connor and his partner Alice Hayes, who own three cottages and a coffee shop on the island posted the vacancies on social media last month.

The couple were again inundated with enquiries by phone, email, social media messages and paper applications from around the world and from such countries as Mexico, Finland and Argentina.

Applications were limited to the first 300 applications but an additional 1,000 people emailed asking to be considered for the jobs on the island which has no hot running water and electricity.

“We had to introduce criteria this time around as it took us over a month last year to wade through all of the 40,000 plus applications. We are still stunned at the fact that so many people still want to come to the island to work here. It is a very beautiful place but living standards are basic,” said Mr O’Connor.

Located about three miles off the coast of Dingle, Co Kerry, the Great Blasket Island was home to the late author and storyteller Peig Sayers, whose writings formed part of the Leaving Cert Irish curriculum.

Over the past several months the couple have been carrying out some essential tasks including adding another bedroom to one of the cottages and upgrading other amenities.

The previous two couples were Annie Birney and Eoin Boyle, from Dún Laoghaire, Co Dublin, moved to the isolated island on June 24, and opened the island up to visitors for a shorter three-month period due to Covid-19 restrictions last year.

Mr O’Connor’s links to the island date back to when his grandfather and granduncle bought the island which eventually ended up in lengthy and costly legal battles in the High and Supreme Courts against the State and Charles Haughey over ownership and use rights.