Aggravated burglary: The rise of a 'nasty' crime

Burglaries by armed culprits are on the rise, with elderly people the likely victims 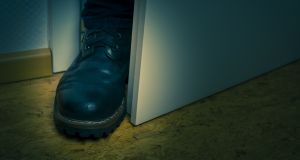 Joe opened the door. Even if he was a younger, healthier man, he could have done little to stop what happened next. Photograph: iStock

The Keoghs were not expecting any visitors to their home in Newbridge, Co Kildare on New Year’s Eve. Joe (92) and Evelyn (89) had been cocooning for nearly a year and the only people who usually called up were their daughters.

By 5pm, Joe had drawn the curtains and lit the fire before settling in for the night. He had recently stopped driving due to his dementia and the absence of a car in the driveway made the house appear empty.

When there was a knock on the door 15 minutes later, Joe and Evelyn assumed it was one of their children come to wish them a happy new year; family members tended to knock rather than ring the bell.

Joe opened the door. Even if he was a younger, healthier man, he could have done little to stop what happened next. “Dad is about 5’1”. He was a jockey so he is not a very big person,” his daughter, Dymphna Murphy, says.

A masked man grabbed Joe by the throat, held a gun to his head (it was later discovered to be a realistic-looking imitation firearm) and pushed him towards the wall.

Four other men, also wearing balaclavas and dark clothing, followed in behind the first raider. One of them grabbed Evelyn, who suffers from vascular dementia, and held her down in a chair.

When Evelyn saw one of the men pushing her husband she had the presence of mind to stand up and tell them he has a heart condition. “If you hurt him, you will be done for manslaughter,” she said.

The men pushed Joe into a chair beside his wife. It was then that the couple noticed that, as well as the gun, the men were also armed with batons.

Three of them ransacked the house looking for money, searching through the 70 years of possessions the family had gathered while living there.

“And of course they got money because my parents don’t know how to use the machine in the bank if there is no one there,” says Dymphna.

A neighbour had heard the noises. He thought it was strange as the Keoghs were known as very quiet, religious people.

“But he assumed they were just having some fun on New Year’s Eve,” says their daughter. “The guards said it was as well he didn’t come in because he’s a big burly guy and things could have escalated.”

The raiders escaped with about €23,000 in an ordeal which lasted about 10 minutes. A Garda unit, in the area to raid an illegal shebeen, was at the house a few minutes later but was too late to catch the gang.

Joe and Evelyn escaped serious injury but a month later, the Keogh family are still dealing with the psychological fallout.

“My mum took it very personally. She couldn’t understand why someone would do this to her. She gives to charities. If someone knocked on the door looking for a coat, she would give them a coat,” Dymphna says.

Both feel “incredibly helpless”, she says. “There’s just a sense of fear and anger and sadness and confusion.”

This extends to the other family members who feel guilty they were not there at the time, she says.

The Keoghs were the victims of what is known in law as aggravated burglary, a particularly nasty type of break-in which became significantly more common since the start of the Covid-19 pandemic.

At a time when almost all other theft and robbery offences fell, some by as much as 45 per cent, aggravated burglary rose by 15 per cent in the first three quarters of 2020, to an average of 26 a month.

In law, aggravated burglary is defined as breaking into a property armed with a weapon. In practice, cases brought to court typically involve break-ins where the occupants are home and are threatened or put in fear in some way.

Part of the reason for the increase is obvious. People are spending more time at home due to the pandemic, meaning burglars are much more likely to encounter occupants during break-ins. However, the upward trend predates the pandemic. In the 12 months preceding Ireland’s first lockdown, aggravated burglaries increased by 25 per cent nationwide.

Outside Dublin, gardaí believe burglary gangs are becoming more aggressive, with some willing to target a house regardless of whether it is occupied or not. Burglaries also seem to be becoming more targeted, with elderly people making up an oversized portion of victims, sources say.

The chief suspects in the break-in at the Keoghs’ house are a case in point. They are also believed to be behind another aggravated burglary a month previously in Athy. The modus operandi was remarkably similar; they burst through the front door and badly beat a 70-year-old occupant before ransacking the house for cash.

The Irish courts take an “extremely dim view” of burglaries of occupied houses, senior counsel Garnet Orange said. He pointed to a 2018 Court of Appeal judgment which states the mid-range of sentence for such an offence should be between six and 10 years in prison, with more serious cases attracting 11-15 years or even life.

It is not just judges who consider such crimes particularly egregious. Irish juries have been known to acquit people who use sometimes extreme violence on suspected burglars. The most famous example is probably the case of Pádraig Nally who, in 2006, was acquitted of the manslaughter of John Ward. Nally shot the unarmed Ward dead because he believed he was about to be burgled.

In 2018, a jury cleared a 20-year-old Martin Keenan of murdering a trespasser in his home by stabbing him with a garden shears. It was the first murder case successfully defended using the Defence and the Dwelling Act, a law introduced by Fine Gael in the aftermath of the Nally trial which allows homeowners to use reasonable force to defend their property.

“It’s not just a legal thing. I think it might be something buried very deep in the psyche of the Irish, that every man’s home is their castle,” suggests Orange.

In Dublin, the rise in aggravated burglary has been far higher than in the rest of the country. Rates across the capital rose by more than 25 per cent last year, with Garda data showing a particular surge in the north and central areas of the region.

In the central area, there was a 100 per cent increase in such incidents (from seven to 14), and in the north of the region the figure was up by almost 260 per cent, from just 17 incidents to 44 last year, a Dublin City Joint Policing Committee heard last month.

Assistant Garda Commissioner for the Dublin region Anne Marie Cagney said that while the actual numbers were relatively small, aggravated burglary had an outsized effect on communities in terms of fear.

“In my view just one incident is enough to cause community fear and harm,” she told The Irish Times. “It’s a crime that is not nice for our communities. It causes a lot of fear and a lot of intimidation.”

Cagney recently decided to have her staff drill down into the figures to determine what was causing the rise. They found a significant factor was drug-related intimidation; people breaking into houses of drug users, not necessarily to steal from them but to intimidate them or their families, usually over an unpaid debt.

“We found there can be a form of intimidation in the act. It could be physical or it could be silent. But the threat is there.”

According to a research report published last month, almost a quarter of people in Dublin’s northeast inner city have experienced drug-related intimidation.

According to one of the report’s authors, Dr Matt Bowden, of Technological University Dublin (TUD), the “depth” of the issue is as concerning as its breadth.

“These crimes are designed to send a message. That message carries over to people’s family, to their friends and the community at large,” he says. “There’s enough of it out there to generate a critical mass of fear.”

In his research, Bowden came across occasional stories of people breaking into houses to recoup cash for drugs or to ransack a house “to send a message”.

But even he was somewhat taken aback when he saw the extent of the rise in aggravated burglaries in Dublin last year. “Most of what you’d hear about is people’s windows being broken or paint being daubed on houses. For that to escalate to aggravated burglary, that surprised me.”

In response to the spike, Cagney has put in place a new Garda operation in Dublin.

In each division in the region, a “senior investigating officer” has been tasked with auditing their local crime figures to discern which offences involve drug-related intimidation.

If intimidation is identified as a factor in a crime, a specialist investigation is launched, including the establishment of an incident room. Officers from the Serious and Organised Crime Unit and the Criminal Assets Bureau can also be drafted in.

At the same time, a local inspector makes contact with the victims to offer them confidential advice and support.

It is “a whole-of-policing approach” involving support for victims and investigation of offenders, Cagney says, equating it to how the Garda deals with victims of domestic violence.

“Not everyone in the community is empowered to report. This is about sending out the message that you can report in confidence and that I am committed to providing a full investigation.”

It is too early to gauge the operation’s effectiveness but there are some encouraging signs. The latest figures for aggravated burglary in the capital show the first decline in months.

Back in Newbridge, there is also some hope the raiders at the Keoghs’ house may be brought to justice. The replica gun used to terrorise the couple was left at the scene and the Garda have now obtained a DNA sample from it.

“We’re fairly sure who they are. It’s just about proving it,” a Garda source said.