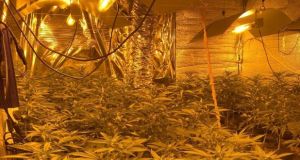 During the course of the search a cultivation unit with over 300 cannabis plants with an estimated value of €250,000 was discovered. Photograph: An Garda Síochána

A man in his 30s has been charged in connection with the seizure of 300 cannabis plants in Carrickmacross, Co Monaghan, during the search of a property over the weekend.

On Saturday morning gardaí searched a house and discovered the plants, which had an estimated street value of €250,000, pending further analysis.

One man was arrested following the drugs seizure and has now been charged. He is due to appear before Monaghan District Court on Monday morning.

A Garda spokeswoman said investigations in the case were “ongoing”.