Union says even though workers knew the cuts were coming, people are ‘shocked with the extent of the numbers’ 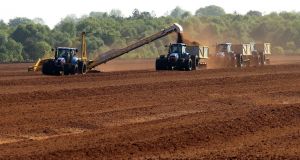 Turf-cutting in Co Offaly. “We’re trying to position Bord na Mona for the future. It’s very important that we concentrate on the future. We are doing this because of global climate change requirements”

Nearly 500 jobs in Bord na Móna will be lost, beginning early next year, following a decision by the semi-State company to close 17 of its 62 currently active bogs immediately, and to end peat harvesting in 45 more within seven years.

Job losses could begin by early next year. However, the company is hopeful that many workers in their 50s or early 60s will be attracted by voluntary redundancy. Talks with unions will begin shortly.

However, the union Unite has called on Minister for Communication, Climate Action and Environment Richard Bruton to intervene, warning that the Government was “sleepwalking into a crisis which will devastate midlands communities”.

Peat volumes hit a high of 6.5 million tonnes in 2013, although this will fall to 2 million tonnes within two years. All peat harvesting for energy – if not for gardening – will end by 2028, two years earlier than planned.

Saying it was a difficult day for the midlands, Bord na Móna’s chief executive Tom Donnellan said the decisions were necessary if the company was to turn away from climate-damaging peat towards renewable green energy.

“Decarbonisation is the biggest challenge facing this planet. For Bord na Móna it presents both a serious challenge and a national opportunity. Standing still is not an option for Bord na Móna.”

Mr Donnellan said 200 jobs would go in management and administration grades, many in the Newbridge headquarters. Yet difficult decisions now would offer greater security for the remaining 1,500 to 1,600 employees.

He said it would take eight to 10 years for Bord na Mona “to get out of the peat business”, adding that the company would invest further in renewable energy, high-value recycling, and try to develop new businesses in the midlands.

So far the semi-State has identified prospects that could support 400/500 jobs, including 50 extra jobs at its its tyre recycling plant. Bord na Móna wants 75 per cent of its energy to be renewable by 2020, up from 10 per cent in 2010.

“There will be opportunities for some to redeploy and avail of training. We’re trying to position Bord na Mona for the future. It’s very important that we concentrate on the future. We are doing this because of global climate change requirements.”

Bord na Móna would overcome the challenges, and job numbers would grow again, “but this is not to minimise the real short-term challenges for people that flow from decarbonisation”.

Siptu’s Willie Noone said that even though the company’s workers knew that cuts were coming, the scale of Wednesday’s decision left people “shocked with the extent of the numbers”.

He said unions would now fight for the best packages for those leaving and good terms for those staying. “Our role is to fight to get jobs replaced in [places] that will be decimated by these job cuts.”

In relation to selecting areas to end peat harvesting, he urged the company to “be conscious of the communities that those locations are in, particularly in areas that are totally dependent on Bord na Móna jobs”.