‘Workaholic’ victim has been named locally as Derry Coakley 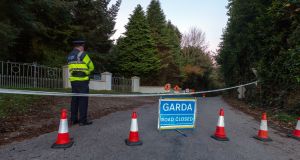 Gardaí cordon off a road in Raleigh North, near Macroom where a man was shot dead on Tuesday night. Photograph: John Delea

A man in his 60s has been arrested after another man was shot dead at a farm outside Macroom Co Cork on Tuesday night.

Gardaí have begun an investigation following the killing of the 60-year-old at around 11.30pm on Tuesday. The deceased has been named locally as Derry Coakley.

Detectives made the arrest on Wednesday and were questioning the suspect at Bandon Garda station under Section 50 of the Criminal Justice Act.

“Gardaí are appealing for anyone who has any information or who were in the Raleigh North area of Macroom between 10.30pm and 12 midnight last night, October 23rd, 2018 to contact Macroom Garda Station on 026-20590, the Garda Confidential line in 1800-666-111 or any Garda Station”, gardaí later said in a statement.

The victim managed to ring a friend following the shooting and when the friend arrived at the scene, he found the man seriously injured and he immediately contacted the emergency services.

It’s believed that the man died at the scene at Curraheen, Raleigh about four kilometres south west of Macroom and gardaí immediately requested the services of the State Pathologist’s office.

Gardaí also requested the services of the Garda Technical Bureau from Dublin and the man’s body remained at the farmhouse on Wednesday and the scene remained preserved pending their arrival.

The deceased, a separated father of one, worked as an agricultural contractor and hackney operator in the Macroom area and lived on Castle Street in the town centre with his elderly mother.

It is understood that the shooting took place on a farm belonging to a local family. Gardaí requested the services of the Regional Support Unit who were dispatched to the scene in support of local officers who were concerned that a firearm had been discharged but had not been recovered.

Gardaí are investigating whether the shooting may be linked to the man’s work as an agricultural contractor and the disposal of building material at a landfill site in the area.

Locals in Macroom on Wednesday morning expressed their shock at the shooting, describing the dead man as “well known and hardworking to the point of being a workaholic” providing agricultural contracting services.