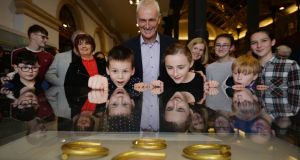 Sam Bates and Alisha Wauchope, grand children of Norman Witherow (centre), one of the finders of the Tullydonnell hoard unearthed near Convoy in Co Donegal. Photograph: Alan Betson / The Irish Times 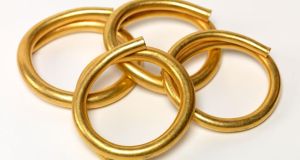 A hoard of gold, among the heaviest ever discovered in the country, is to go on display at the National Museum of Ireland on Wednesday.

Investigations by experts at the museum have confirmed four gold rings which were part of the hoard unearthed in Donegal earlier this year, date to the late Bronze Age.

The four rings weighing just over four kilograms in total, will complement the museum’s permanent gold exhibition, “Ór - Ireland’s Gold”, which showcases one of the largest and most significant collections of Bronze Age gold internationally.

The gold, which was discovered in a field in Tullydonnell Lower, near Convoy in East Donegal, will go on temporary loan to the Donegal County Museum next year.

The Tullydonnell hoard was discovered in excellent, near-perfect condition. The museum’s keeper of Irish antiquities, Maeve Sikora said conservation staff had conducted extensive analysis and the results indicate the hoard dates to the late Bronze Age, between approximately 1200BC and 800BC.

Ms Sikora explained that while the gold overlapping rings are circular in shape, it is not possible to accurately determine their use: “They’ve been described as ‘arm bands’ because of their size, but it is thought more likely that gold was shaped in this fashion as a means to store wealth,” she said.

Director of the National Museum Lynn Scarff said the launch of the “Tullydonnell Hoard” exhibition was timed to coincide with the introduction of extended opening hours across the National Museum of Ireland’s four sites which offer free admission and are open seven days a week.

She said the Tullydonnell hoard was “the latest addition to the thousands of rare and beautiful artefacts that we are proud to add to our national collection and exhibit at our archaeology museum on Kildare St.”

Judith McCarthy curator of the Donegal County Museum said the Tullydonnell hoard was a “unique and significant find.”

“We were delighted to be able to assist both the finders and the National Museum of Ireland with this discovery. Donegal has a very rich and varied history stretching back thousands of years and the Tullydonnell hoard forms an important part of this multi-faceted story,” she said.

The finders of the hoard who include members of the family who farm the land at Tullydonnell are expected to be at the National Museum for the launch of the exhibition Wednesday. They have been thanked by Minister for Education Joe McHugh on behalf of the Government.