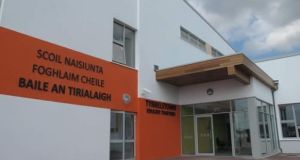 There are concerns for the safety of pupils and teachers in up to 40 schools built by the same developer following the closure of two Dublin primary schools on Tuesday due to structural issues.

The schools, with a combined enrolment of 1,200 students, are among 40 schools built by Western Building Systems since 2008 which face structural checks over the next three weeks.

Last weekend, structural problems were discovered in Ardgillan Community College in Balbriggan, Co Dublin. Nearly 100 transition year students have been told to stay at home this week as a result.

Problems were identified during a fire safety audit when the walls in two classrooms were opened up. A structural engineer found ties fixing the exterior and interior walls were absent or inadequate in places.

Most concern focuses on schools built under a fast-track “design and build” programme, which ran from late 2007 to 2013. This resulted in some schools being built within just three months.

The Department of Education is in the process of informing all schools affected of when they will face inspections.

Officials are in a race against time to try to complete the inspection before the resumption of school following the mid-term break.

In the Dáil on Tuesday, Taoiseach Leo Varadkar said it was possible that some schools would have to be partially or entirely closed, while in others it might be possible to conclude temporary measures and complete the work over the summer holidays.

He also warned of potential legal action if it emerged there were further structural issues. “It does certainly appear to me that corners were cut back in the Celtic Tiger period when it comes to the building of some of these schools which is truly disgraceful in my view,” he said.

However a spokesman for Western Building Systems said its “integrity has never been questioned” until now.

“Each of our Department of Education projects, both before and since the amendments to building regulations in 2014, were subjected to inspections during construction. Every time, each was certified as meeting compliance standards,” the spokesman said.