Workplace of the future will still need humans, conference hears 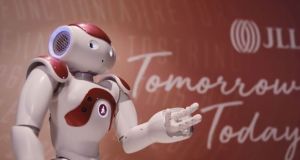 The likelihood that a super smart robot army will soon be marching on Irish workplaces and stealing the jobs of simple humans was downplayed at a Dublin event focusing on the workplaces of the future.

Addressing a conference organised by the Association of Higher Civil and Public Servants (AHCP), Dr Lisa Wilson of the Nevin Economic Research Institute said the “perceived unstoppable march of robots coming to take our jobs is overstated”.

In a talk with the arresting title of ‘Robots, risks and reality: the evolution of automation in the workforce’, Dr Wilson suggested that excitable newspaper headlines claiming that the day of the machine was nigh were probably wide of the mark.

She accepted that workplaces were evolving and many jobs would inevitably be reshaped by advances in robotics and developments in artificial intelligence but stressed that vast majority of jobs that require human intervention would continue to do so.

She said US-based research claiming that up to 30 per cent of jobs currently done in Ireland by humans would soon be done by robots was flawed and said that the percentage of jobs likely to be rendered redundant by technology was closer to 7 per cent.

The employees most at risk from automation include plant and machine operatives, skilled tradesmen such as welders, cleaners, and those working in some administrative and secretarial roles.

Those working in the caring, leisure and service industries are less likely to see their jobs disappear as are those whose jobs require imaginative thought processes, according to Dr Wilson.

Even in areas where automation was both possible and likely she said, human intervention at certain “bottlenecks” would be required meaning that while many of the jobs of the future would change significantly, there would still be a role for human beings.

The sectors most at risk were transport and storage, wholesale, retail and distribution and manufacturing while the sectors facing the lowest risk from automation were in education, health and social work, public administration and professional, scientific and technical activities.

She said that “the discussion about the future of work have tended to focus on the risk of job loss” and said that in such a narrative there is an assumption “that the only factor determining risk of job loss is technological capability”.

She said government policy should focus on re-skilling workers whose jobs disappear and offering more employment supports for those who will need it.