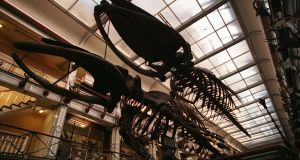 The skeletons of a suspended humpback whale and adult fin whale at the National Museum of Ireland - Natural History. Photograph: Frank Miller

Wanted: whale hunter with taste for adventure and head for heights. No harpoon required.

The National Museum of Ireland - Natural History in Dublin is seeking experts to carry out the safe de-installation of a suspended humpback whale and adult fin whale skeleton which hang from the glass ceiling of the 160-year-old building on Merrion Square.

The work is understood to form part of a €15 million plan to upgrade the “Dead Zoo” by replacing the Victorian roof and constructing a new extension to include a cafe, additional storage areas and lifts.

Suspended from the ceiling are the skeletons of a fin whale found at Bantry Bay in 1862 – estimated to be about 20m (66ft) long – and a juvenile humpback whale stranded at Enniscrone, Co Sligo, in 1893.

Dismantling the delicate exhibits, which alone contain hundreds of individual bones, will be challenging; doing so from a glass ceiling with a history of water leaks will be doubly so.

On the eTenders website, the Irish Government’s electronic tendering platform, the museum says it is seeking experts who can show they have previously dismantled suspended whale specimens in a museum environment.

Companies interested in tendering must outline the number of qualified personnel available to carry out the operation and be available for the work towards the end of October this year.

The museum houses an estimated two million exhibits of world wildlife and shelves are stacked with jars of octopuses, leeches and worms preserved in embalming fluid. It is considered by many to be a Victorian time capsule. The basic layout has remained largely unchanged since it first opened.

However, the need to renovate the building was urgently highlighted with the collapse of a heavy stone staircase in 2007, which forced the museum’s closure. There followed a major repair and refit which cost about half a million euro.

While there were plans at the time to build a major extension and install a lift, these were shelved due to spending cutbacks during the last economic recession.

As a result, the public has not had access to the three storeys of balcony display cases that ring the upper reaches of the first floor since it reopened in 2010.

This is due to health and safety concerns that visitors could not be evacuated from these balconies quickly enough to satisfy fire safety requirements.

The old railings along the original cast-iron cantilevered balconies were also thought to be too low for proper public safety.

The museum, next to Government Buildings on Merrion Square, was opened in 1857 and draws more than a million visitors each year, mainly schoolchildren and tourists.