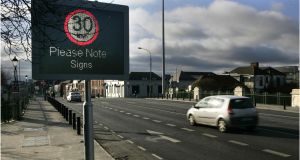 The low speed limit will apply to roads which previously allowed speeds of 50km/h and 80km/h . Photograph: Dara Mac Dónaill

Speed limits will be cut to 30km/h across Dublin city and suburbs, including on most major arterial routes, under new Covid-19 traffic laws to be presented to city councillors on Wednesday.

Dublin City Council had planned to introduce the 30km/h limit in all residential areas by September. However, it now plans to extend the limit to almost all major approach roads to the city to “protect the larger numbers of pedestrians, cyclists and vulnerable road users” accessing the city.

The low speed limit will apply to roads which previously allowed speeds of 50km/h and 80km/h and will include the Royal and Grand Canals and the Rathmines, Ranelagh, Harold’s Cross and Donnybrook Roads on the southside of the city and Phibsborough Road, Dorset Street, Manor Street and Gardiner Street on the northside.

Only a handful of major approach roads, such as the N3 and N1 will retain higher 50km/h and 60km/h limits, but as they near the city their speeds will drop to the lower 30km/h limit. A speed of 80km/h has only been permitted on a section of the Chapelizod Bypass and the entry to the M1 motorway.

The council has already begun introducing extensive traffic calming and pedestrian, cyclist and public transport priority measures under its “mobility intervention programme” designed to facilitate the reopening of the city as Covid-19 restrictions ease.

While the council has described these measures as temporary, the 30km/h restrictions are being proposed under bylaws, which would mean they would remain in place permanently, unless new bylaws were introduced to rescind them.

Unlike the other measures in the mobility programme, such as the removal of traffic from College Green, and the reallocation of road space to cyclists and walkers, the speed limit bylaws will require the approval of councillors.

However, previous applications of the lower limit have met with strong public support. More than 900 submissions were made to the council last year on the extension of the 30km/h limit to all residential areas, almost 700 of which supported the lower limits.

The council said its proposal to reduce the speed limit was “in line with other European cities” which had taken similar measures “in order to protect the larger numbers of pedestrians, cyclists and vulnerable road users moving around in these areas and on the road carriageway due to Covid-19 travel restrictions and social distancing requirements”.

The council hopes to have the new limit in place by the end of the year.