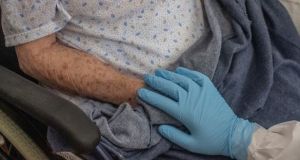 There have been 4,732 confirmed cases of Covid-19 in Northern Ireland, with a total of 53,704 people tested. Stock photograph: David Ramos/Getty

There were calls for people to observe social distancing rules as the latest figures from the Department of Health showed that two more people died in Northern Ireland from coronavirus, bringing the total number of deaths to 526.

And out of 583 tests just four people tested positive for Covid-19, taking the total number of confirmed cases to 4,732.

So far 53,704 people have been tested for the virus in Northern Ireland.

The PSNI and the North’s Minister of Health Robin Swann meanwhile pleaded with people, particularly young people, to keep observing the Covid-19 regulations.

Following weekend trouble in Botanic Park, Belfast, at Ballyholme beach near Bangor and near Newcastle, Co Down police said on Monday they had to deal with estimated crowds of one thousand people on the beaches at Crawfordsburn and Helen’s Bay close to Belfast and in other coastal areas.

Amid reports of drunkenness, drug abuse, other anti-social behaviour including people defecating in gardens at Crawfordsburn police urged, “Please use your common sense and avoid well known tourist and beauty spots so that you protect your own and other’s health.”

Mr Swann said it appeared that for “some people the compliance with restrictions and social distancing measures is starting to fray”.

He said people must not “flout” the public health guidance.

“Don’t think this is all over because that kind of complacency will undo the progress we have all achieved so far,” said Mr Swann.

In the Northern Assembly the SDLP, with a supporting Green party amendment, proposed a motion in light of Covid-19 calling for the extension of the current Brexit transition period beyond December 31st.

SDLP MLA Matthew O’Toole cited how the UK’s chief negotiator David Frost and several British government Ministers had insisted it would be “unthinkable” to push back the transition period.

“That is mad. It is a bit like driving 30 miles to test your eyesight,” said Mr O’Toole.

He added that the SDLP motion was not about trying to overturn the referendum result but was designed to limit the damage of the UK exiting the EU too early.

Green MLA Rachel Woods said the Assembly should “follow the other devolved administrations and send a clear signal to Westminster that Northern Ireland needs this (additional) time to recover from the pandemic and prepare for the (Northern Ireland) protocol coming into effect”.

DUP MLA Mervyn Storey said what he had heard were expressions of “doom, of worry, of fear” about Brexit “rather than grasping the opportunity of being unshackled from a system that is undemocratic and is riddled with inconsistencies and financial inappropriate behaviour”.

Sinn Féin MLA and former MEP Martina Anderson said as the community and business people battled with the crisis of coronavirus they weren’t “even slightly prepared for what could hit us at the end of this year – even the most fanatical Brexiteers know that”.

The amended motion was carried.

The North’s chief scientific officer Professor Ian Young indicated that people will be able to meet indoors in Northern Ireland by July 20th.

Prof Young said on Tuesday that the logic of hotels and guest houses opening on July 20th, as announced by economy Minister Diane Dodds on Monday, was that indoor visits also would be allowed.

Prof Young told BBC Radio Foyle that people should be aware that meetings indoors are “associated as higher risk” but “if hotels open by July 20th, depending on progress of the epidemic, then it would be necessary to allow indoor meetings before then”.