Dublin temperatures reach 26 degrees ahead of change in weather

Tuesday was not the hottest day of the year so far but Roscommon recorded 25.8 degrees 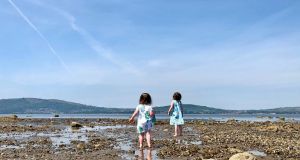 Ireland enjoyed a fine, hot day on Tuesday but no records were broken - possibly a sign of things to come with a dip in temperatures expected ahead of next weekend.

It had been expected that Tuesday would see temperatures rise above 27 degrees - the record for this year so far set on bank holiday Monday in Co Mayo - but things did not quite heat up enough.

Met Eireann recorded the highest temperature of 26 degrees in Dublin’s Phoenix Park, while elsewhere sunbathers in Co Roscommon sat under blue skies with temperatures of 25.8 degrees, with 24.7 degrees recorded in Co Tipperary. The finest conditions were in the midlands and south east of the country.

In the west and north things were a little chillier - Belmullet in Co Mayo recorded just 14 degrees.

“Temperatures are going to pull back again; we’re looking at probably the mid to high teens in maxes for the rest of the week,” said a forecaster.

As we approach the weekend “it will be a little more broken. It could get cooler and blustier at times but it’s far from terrible weather [forecast].”

Much of the change is because the recent air flow has been coming in from the south east whereas that is now going to shift to the north west over the weekend. While there will be some rain, the general picture is for a slightly cooler, slightly gloomier period ahead.

On Tuesday night rainfall is expected to spread from the south east.

The rest of the week is to be much cooler, with Wednesday forecast to be blustery and cloudy. Temperatures in the north west will be between 11 and 14 degrees, but may reach 20 degrees elsewhere.

Thursday is to be a cool, damp day, with rain showers from the morning onwards, and temperatures of 12 to 16 degrees.

The showery and cloudy conditions will continue into Friday and Saturday, with top temperatures of between nine and 14 degrees.

Tuesday had started well - by 8am temperatures were already reaching 16 degrees according to early reports from weather stations.

Top temperatures of 27 had been expected in Leinster and Munster, with the north and west of the country to be cooler at between 15 and 20 degrees, and cooler still along the coast.

Weather stations across the country reported no rainfall on Monday, as the dry, sunny weather of recent weeks continued.

There has been “unprecedented demand” over recent weeks as it appealed to the public to only use water for necessary activities.

Some 16 water supplies are already classified as at “drought” level, while a further 38 are “pending drought”, said Yvonne Harris, the utility’s head of customer operations.

“We feel it is highly likely we will be required to implement a water conservation order,” she added.

This spring has been the driest on record in Leinster since digital records began around 70 years ago, Met Éireann has said.

Since early March seven weather stations have experienced an “absolute drought,” which is 15 consecutive days without rain.

Drought-like conditions have been most apparent in Dublin where the Phoenix Park weather station had 42 days from March 18th to April 28th in which just 5.8mm of rain fell, with record low levels seen in May as well.

Demand for water on hot days was “soaring beyond any previous levels,” Ms Harris said.

“Last Saturday when it was a very hot and sunny day in Dublin, we experienced an additional demand of 30 million litres of water,” she told RTÉ’s Morning Ireland.

“That is the equivalent of an additional 200,000 people (using water) in Dublin. And we have found that our data is showing similar trends throughout the country.”

Latest figures on water usage were recorded before the dry and sunny bank holiday weekend. In the meantime, supplies from rivers, lakes and springs are “drying up”, Ms Harris said.

Technical teams at Irish Water are currently monitoring supply levels and a conservation order is expected to be announced once they have dipped to levels stated under the utility’s criteria for restrictions.

Ms Harris said she could not predict when it would be announced or how long it would last, as it would be weather dependent.

Hand washing hygiene was obviously critical during the pandemic, Ms Harris added, but she appealed to the public not to use water for “unnecessary purposes”.