Coronavirus: 25% of new cases arising in the community with no known link to other cases

Dr Tony Holohan, Chief Medical Officer, Department of Health has urged the public to stick with ‘tough’ restrictions for now. Eight further deaths and 10 new cases of Covid-19 have been reported in the State. Video: RTE News Now 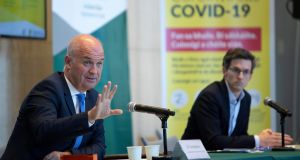 A further eight deaths of people diagnosed with Covid-19 have been reported by the National Public Health Emergency team. This brings to 1,658 the number of deaths in the Republic.

Some 10 new laboratory confirmed cases were reported by NPHET on Tuesday, bringing the total number of cases to 25,066.

While this is the lowest daily figure since March 11th, Chief Medical Officer Dr Tony Holohan cautioned against “over-interpretation” of the figure due to the bank holiday weekend.

Dr Holohan said the Black Lives Matter protest in Dublin attended by thousands of people at the weekend posed “a risk to life”.

Now was “not the time” to organise or attend such mass gatherings due to the risk of transmitting Covid-19, he said.

People should follow public health advice and exercise their judgement on “impromptu” mass gatherings, he said.

“We have no public health advice on protest; our advice is on gatherings,” he told the NPHET briefing on Tuesday.

Mass gatherings were banned in March as part of the restrictions imposed by the Government to curb the spread of coronavirus.

Of the approximately 500 new cases over the past week, about half occurred in that week, and about half of these were not linked to known clusters in care facilities, meat plants or other locations.

This means about quarter of new cases are arising in the community with no known link to other cases.

Dr Holohan said 54 per cent of last week’s cases involved people aged between 24-55 years, and were spread across 21 counties in Ireland.

“While we are doing well, the potential for spread remains present across all regions of the country,” he said. “NPHET will meet on Thursday and submit further recommendations to Government for consideration.”

Almost half of people tested are taking longer than four days from onset of symptoms to being swabbed, according to deputy chief medical officer Dr Ronan Glynn, who urged people to know the symptoms of Covid-19 and get medical attention as soon as they appear.

Asked whether the wearing of face-masks should be made mandatory, Dr Holohan said the evidence for this approach was not strong enough.

There were 36 patients with Covid-19 in intensive care on Tuesday morning, down from a high of 160 at the peak of the epidemic.

The number of clusters of the disease in residential care facilities increased by four since Friday, to 472; of these, 258, an increase of one, were in nursing homes.

A total of 1,049 people have died in residential care facilities, including 917 in nursing homes.

Earlier the Government urged people to stick with ‘tough’ measures to prevent the spread of coronavirus so that some restrictions can be eased as planned on June 8th.

At the Government’s morning Covid-19 briefing on Tuesday, assistant secretary general at the Department of Taoiseach Liz Canavan said people should continue adhering to travel and social distancing guidelines. She asked people to “keep it up for a few more days”.

“We know it has been tough. However as we approach the end of phase one of the roadmap, we can see that the efforts everyone has made are continuing to benefit our communities. Hopefully that gives us a very good chance of moving to phase two as scheduled,” Ms Canavan said.

In phase two, which is due begin next Monday, the 5km restriction on movement will be widened to 20km but unnecessary journeys should still be avoided.

Visits to homes of over 70s and medically vulnerable will be allowed by no more than a small number of people for a short period of time.

Up to four people may visit another household for a short period while maintaining strict social distancing.

Ms Canavan said it was clear that many people did not travel outside their locality over the Bank Holiday weekend.

Meanwhile, the number of people claiming the Government’s special weekly pandemic payment has dropped by 36,000 since last week as more people return to employment.

Ms Canavan said there are now 543,000 unemployed recipients of the weekly €350 payment.

The overall value of the weekly payments is now around €190 million.

Ms Canavan also said Irish Water is urging the public to conserve water after an increase in water usage in the past week and over the Bank Holiday weekend.

“First of all I must emphasise that we all have to prioritise hand-washing but Irish Water is today again appealing to the public and to businesses to make every effort to conserve water by discontinuing non-essential usage such as the operation of power-washers, by using a watering can rather than a hose in the garden, by taking showers over a bath and by fixing any dripping taps were it is possible to do so.”

She said it was “very likely” that a hosepipe ban would be needed.

“It is now very likely that a water conservation order, what we know as a hosepipe ban, will be necessary to conserve water supplies as demand for water continues to soar and the drought conditions continue.”