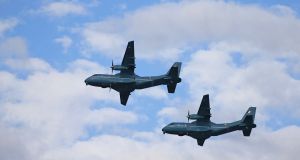 Some of Ireland’s search and rescue (SAR) functions may be carried out by aircraft based in the UK, raising concerns among senior Irish military officers.

Private companies will shortly be asked to tender for a €60-million-a-year contract to provide a new SAR service to replace the current service provided by the Irish Coast Guard, CHC Ireland and the Air Corps.

The winning bidder will likely be required to base four SAR helicopters at Irish bases. It will also be required to provide a fixed-wing aircraft or drone to provide top cover for rescue missions and be available on a 24-hour basis.

The technical specifications for the contract have yet to be finalised but, according to sources familiar with internal discussions, serious consideration is being given to allowing the winning bidder to base their fixed-wing aircraft in the UK as a cost-saving measure.

Currently the Irish Air Corps provides top cover in many SAR missions, using its CASA maritime patrol aircraft, an arrangement which will come to an end when under the new contract.

Several senior military officers have raised concerns about the proposed new arrangements, including from an intelligence point of view.

About six private aircraft companies are expected to bid for the contract, of which at least two have fixed-wing aircraft based in the UK. At least one of these is also contracted to do clandestine work for the UK’s ministry of defence.

Irish officers are concerned about the intelligence implications of allowing UK-based aircraft to collect data over Ireland as they provide top cover for rescue missions.

“The main worry is control of the data. It’s not that we wouldn’t necessarily give this data to the UK if they asked for it. But if the planes are flying out of an English airfield we have zero control over it,” a military source said.

A presentation for potential bidders for the SAR contract last August made no mention of a requirement for fixed-wing aircraft to be Irish-based.

It described an “outcome-based” approach which allows bidders to “exploit all available technologies to deliver optimal solutions and avoids over-prescribing inputs or outputs which could inhibit innovation or drive up costs unintentionally”.

According to informed sources, Air Corps officers, including its commanding officer Brig Gen Rory O’Connor, have also raised concerns about the future viability of the Air Corps if it is entirely excluded from SAR operations.

“[Brig Gen O’Connor] has gone to general staff and said the provision of fixed-wing services either privately or by another State body is a huge concern for them,” said one source.

“Providing top cover is one of the Air Corps’ key functions. It’s seen as the thin end of the wedge if this is farmed out elsewhere,” said one source.

The Defence Forces declined to comment on the matter this week. The Department of Transport, which, along with the Irish Coast Guard, is overseeing the procurement process, said the technical specifications of the tender are still under development and that no decision has been made in relation to fixed-wing aircraft.

“The specs will have to go through the public spending code and Government approval process. We won’t be able to announce/confirm anything until that is done,” a spokeswoman added.