Varadkar accused of throwing NAGP president ‘under the bus’ 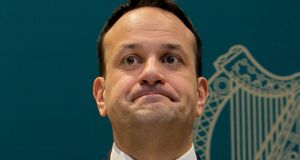 Leo Varadkar: accused of not being sorry for actions. Photograph: Gareth Chaney/Collins

Tánaiste Leo Varadkar has been accused of throwing the president of the GP group he gave a confidential document to “under the bus and reversing over him”.

The Fine Gael leader came under renewed pressure from Sinn Féin in the Dáil, although no other party or grouping raised the controversy over his giving a confidential document negotiated with the Irish Medical Organisation (IMO) to Maitiú Ó Tuathail, president of the rival National Association of General Practitioners (NAGP) last year.

Sinn Féin finance spokesman Pearse Doherty said there were at least 35 changes between the document he gave to the NAGP and the eventual contract document agreed with the IMO.

And he hit out at comments by Mr Varadkar to his parliamentary party meeting that “they should be careful of the friends that they choose”.

“That doesn’t sound to me like words of someone who is sorry for their actions, Tánaiste,” Mr Doherty said.

“That sounds to me like words of someone who is annoyed that they got caught and isn’t that the reality?

“Instead of accepting responsibility for your actions you just threw Maitiú Ó Tuathail under the bus and reversed over him.”

The Sinn Féin TD said Dr Ó Tuathail “isn’t to blame here. He was absolutely within his rights as president of the NAGP to seek this document.”

He said “the wrongdoing here was that you were not entitled to provide this document or indeed the other documents, marked confidential, to the president of the NAGP, to a friend of yours. It was you who made that decision.”

But Mr Varadkar insisted that he had not sought to blame anyone else over the controversy which erupted last weekend.

“I very clearly and very definitely accepted responsibility for this, and I used the term sole responsibility,” when he addressed the Dáil on Tuesday and answered questions on the issue.

Mr Varadkar also said any changes in the final contract were minor after Mr Doherty claimed there were at least 35 changes from the one the Tánaiste provided to the NAGP to the one that was subsequently published by the Department of Health.

Mr Doherty said “the discussions were still alive and ongoing, and that part of your argument simply doesn’t stand up to scrutiny”.

Mr Varadkar said, however, that he did not have a copy of the report so he did not know how Mr Doherty could make a comparison between the documents they no longer had.

The Sinn Féin TD also questioned Mr Varadkar on his contacts with Dr O Tuathail at the weekend. The Tánaiste said he contacted him to verify when he sent the document as he did not have that text message anymore.

Mr Doherty said these texts fall under the scope of Freedom of Information legislation and somebody requesting a confidential document is an official request to the Taoiseach.

Mr Varadkar said he had a personal email address and if he received a work-related email he would forward it to official accounts, “but I don’t as standard keep text messages” and he did not think most people in the House did.

Later, Mr Doherty told the Tánaiste that when somebody requests an official secret document “and you decide to destroy or delete that record and not pass it on to his department, it is not a joke”.

He reiterated the party call to publish all the documents linked to the controversy.

Mr Varadkar said they had received the request and “we will be happy to give you any records we have”.