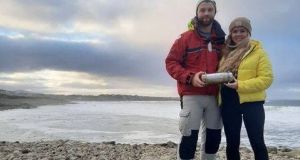 A Donegal surfer who found a Russian time capsule while searching for a surfing location has told of her concern that it might have been a bomb.

Sophie Curran was walking on Bloody Foreland with her friend Conor McClory when they found “this weird tube looking thing” on which Russian words were engraved. Fearing that it might be a bomb or a container for someone’s ashes, she contacted her brother who has a Russian friend.

The brother’s friend translated the words and let them know that it was safe to open the item which was in fact a time capsule.

Speaking to Oliver Callan on RTÉ radio’s Ryan Tubridy show, Ms Curran said that they discovered that the time capsule had not been in the sea for very long.

“It was actually placed on ice at the North Pole at the 90 degrees point, so that means that the ice has melted and it travelled 4,000km down to us in Donegal in just over two years, which is scary.”

The intrepid sleuths contacted a Russian Instagram blogger called Svetla who had been on the boat from which the time capsule was despatched. “She told me that they thought it would be 30 or 50 years before this would be found so the fact that it was found within two years is really scary - that the ice is melting so quickly.”

Ms Curran was told that the people on board the ship were a mixture of paying passengers and researchers. “Svetla, the lady I was talking to, is writing a travel novel, so she just travels all over the world and she’s writing a story about this one. She said she wants the next destination after this to be Ireland. ”

There was also wildlife photographer on board who included some of his images in the time capsule, added Ms Curran.

“The time capsule was filled with letters from people who were on the boat and there was photographs of them, menus, itineraries, everything from the ship. It was very interesting.”

So interesting in fact that she didn’t get to go surfing that day. “I got a bit distracted by the time capsule.”