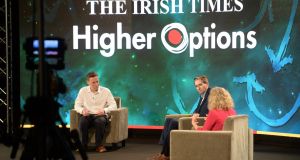 Leaving Cert students will be able to apply for both university and further education courses at the same time under a joint system being considered by Minister for Further and Higher Education Simon Harris.

The move is aimed at boosting the visibility of further education and apprenticeship options which Mr Harris said are often seen as “second best” options compared to the CAO system.

Mr Harris was speaking at the opening of Higher Options, the main information-gathering event for secondary school students exploring their career and study options. Higher Options is organised by The Irish Times with the Institute of Guidance Counsellors.

This year’s event is taking place online on Wednesday and Thursday of this week, with careers talks and question and answer sessions streamed live from a studio at Dublin’s RDS.

Mr Harris said there was a kind of “cultural snobbery” which led many families to consider further education and training as an option for “other people”.

In Ireland, latest figures show about 64 per cent of Irish school-leavers progress to higher education, the highest proportion in the European Union.

By contrast, the numbers choosing options such as apprenticeships in Ireland are among the lowest in the EU.

Mr Harris said students should not think of further education or higher education as an “either or” choice, but as options which complement each other.

He said hundreds of post-Leaving Cert courses, apprenticeships and traineeships offered excellent career prospects for students, as well a platform for further study or progression into higher education.

The apprenticeship system, he said, has also been transformed from one which once offered mainly craft apprenticeships – in areas such as welding and plumbing – to a diverse selection of options ranging from business to bio-pharma, right up to degree or PhD level.

Mary Liz Trant, executive director for skills development in Solas, the further education and training authority, said many new apprenticeships are under consideration, including a new healthcare assistant apprenticeship due to launch soon.

She said a new apprenticeship incentivisation scheme – in which employers receive a grant of €3,000 for each new apprentice registered – has proved popular since it launched earlier this year.

More than 600 employers had applied for the scheme in respect of more than 1,130 apprentice registrations. The scheme has been extended until the end of June next year.

The Government’s aim is that it will lead to about 4,000 apprentices registering over the coming months.