'In the Name of Peace: John Hume in America' is a new feature documentary by Maurice Fitzgerald about John Hume which reveals how his engagement with the US was a major catalyst in the journey to securing peace in Northern Ireland. 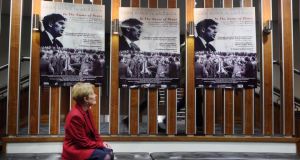 In the Name of Peace: John Hume’s wife, Pat, at the Savoy Cinema in Dublin for the premiere. Photograph: Leon Farrell/Photocall Ireland

Almost 20 years after the signing of the Belfast Agreement, John Hume’s seminal role in the peace process has been transposed to a new film exploring his overtures to American political support.

Citing Bill Clinton’s description of Mr Hume as “Northern Ireland’s Martin Luther King”, the former president Mary McAleese added her own thoughts at the documentary’s premiere in Dublin on Friday, describing the Derry man as “the greatest political problem-solver of our time”.

Maurice Fitzpatrick’s In the Name of Peace: John Hume in America documents Mr Hume’s perseverance in ending the sectarian conflict, focusing in particular on his mission to win US backing.

Now in ill health and absent from Friday’s screening, Mr Hume was awarded the Nobel Peace Prize in recognition of his work, although his SDLP party ultimately conceded political dominance to Sinn Féin.

His mobilisation of American assistance helped to “bring peace, to bring justice and to bring equality to his troubled homeland, with its brick-wall, sectarian, petty, provincial politics”, Ms McAleese said. “To break that open was his job, to let fresh air flow through it. And to bring the grace of decency and integrity and truth to those politics.”

Nobody, she said, was more capable of persuasion and problem sharing. “Tonight John is not with us; his health of course doesn’t allow him to be in our company . . . He did all of this over many, many years against a relentless background of seething scepticism and criticism from so many quarters. The personal toll was huge. I hope there is another documentary about [his wife] Pat Hume. The toll on all of the Hume family was huge, but the sacrifice was made because the price of peace was huge.”

Throughout her opening remarks Ms McAleese invoked the words of the late Seamus Heaney, another Derry native whom, she said, had used the “escape hatch of education” to serve others.

“This was a lifetime’s work, not just a few trips to America,” Mr Hume jnr said of his father’s legacy. “This is something that he did over decades in order to get to where we got to.”

Friday evening’s premier was also attended by Pat Hume and other family, Minister for Justice Charlie Flanagan, and the former politicians Liz O’Donnell and Alan Dukes.

The film, which is narrated by the Ballymena-born actor Liam Neeson, was screened in Belfast on Thursday.

Woman awarded €83,000 damages after slipping and falling in Dunnes Stores 17:40
Cabinet approves purchase of 875,000 doses of Moderna vaccine 17:34
Almost a third of early years childcare workers intend to leave sector within year 17:21
‘It’s the most I have been out in months’: Gym-goers return to their workouts 17:10
Senior Department of Education official to be cross-examined in case over grades 16:56