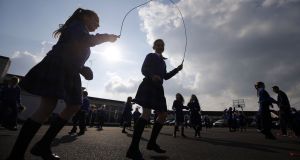 A Department of Education analysis of school enrolment for 2015/2016 shows non-Irish nationals accounted for 10.6 per cent of pupils in primary education. By contrast, among all-Irish primary schools, this fell to 1.6 per cent. Photograph: Nick Bradshaw

A Department of Education analysis of school enrolment for 2015/2016 shows non-Irish nationals accounted for 10.6 per cent of pupils in primary education. By contrast, among all-Irish primary schools, this fell to 1.6 per cent. A similar pattern is repeated at second level.

The statistics are likely to be seized on by critics who claim Gaelscoileanna use soft barriers such as Irish-language admission rules which end up excluding foreign nationals or minority groups.

However, An Foras Pátrúnachta, the patron body for more than Gaelscoileanna, has insisted that its admission policies are open and inclusive and has disputed the interpretation of the figures.

When further broken down by school type, the proportion of non-Irish does not vary significantly across community and comprehensives (11.3 per cent), vocational (12.2 per cent) or voluntary secondary (12 per cent).

Fee-paying schools are included among the “voluntary secondary” schools, which are typically schools owned or run by religious groups.

Caoimhín Ó hEaghra, the patron body’s general secretary, said the figures for all-Irish schools include those in more peripheral Gaeltacht areas which have not experienced an influx of newcomers.

He said a survey conducted among its non-Gaeltacht schools earlier this year indicated that 9.6 per cent of its students were from an “other background”.

It defines this as as a student who themselves or at least one parent were from another country.

Gaelscoileanna, along with multidenominational schools, have surged in popularity in recent years with more than a third oversubscribed.

Most have admissions rules which prioritise children from homes where Irish is the dominant language or where children have attended Irish-language pre-schools, or naíonraí .

They also prioritise the siblings of existing students, a rule common across most other schools.

Bláthnaid Ní Ghréacháin, chief executive of Gaelscoileanna Teo, a voluntary organisation which supports the development of Irish schools, said just 3 per cent of admissions account for children growing up in homes where Irish is the main language.

She said the majority of parents who secure places for their children in Gaelscoileanna tend not to speak Irish.

Ms Ní Ghréacháin added that the fact that many Irish-medium schools are oversubscribed is likely to form the foundation for elitism claims.

“I think you can understand that accusation where demand outstrips supply,” she said. “If I take my local school, where there is one stream, its priority is taking siblings, which is the practical and the sensible thing to do. It can leave a tiny amount of space. If the next priority is Irish-speaking families, you might have only have a few places left in a class of 30.

“The oversubscription leads to disappointment on behalf of parents and creates pressure in the system. Invariably, when people are disappointed and their child does not get a place, this leads to accusations of elitism,” she said.

Ms Ní Ghréacháin insisted that gaelscoileanna were “open to all” and added her organisation has tried to publicise the benefits of immersion education through Irish to non-Irish families with information leaflets translated into seven languages.

A breakdown of the department figures at second level shows that while 12 per cent of pupils overall are non-Irish, this falls to 3.1 per cent among all-Irish secondary schools.