Adams expected to indicate today when he will step aside 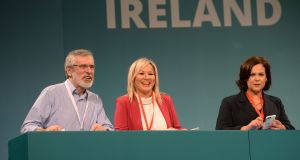 Gerry Adams, Michelle O’Neill and Mary Lou McDonald at the start of the Sinn Féin ardfheis at the RDS. Photograph: Alan Betson

Sinn Féin representatives and members expect that Gerry Adams will signal a timetable for stepping down as president of the party he has led for 34 years when he gives his keynote address on Saturday evening.

TDs say they have been given no indication of what Mr Adams will say this evening, but the expectation throughout the party is that he will lay out his plans to depart from the party leadership, likely over the course of the next year.

Sinn Féin’s leader in the North, Michelle O’Neill, said last night that this weekend’s ardfheis would be “historic” but said that everyone would have to wait until this evening to learn of Mr Adams’s intentions.

Deputy leader Mary Lou McDonald said that one of the themes of the ardfheis was “generational change”.

In her speech to the conference, Ms O’Neill said that she wanted to lead Sinn Féin back into the Northern Executive and Assembly, but although her tone was conciliatory, she indicated no departure from Sinn Féin’s position of demanding an Irish-language Act and the introduction of same-sex marriage in the North.

She said the Sinn Féin leadership was to meet the British prime minister Theresa May next week “to tell her that the two governments must meet as soon as possible to begin mapping a way forward for the implementation of outstanding agreements and guaranteeing the rights of citizens.

“We in the Sinn Féin leadership will continue to play our part to make every effort to find a political solution to the political breakdown,” said Ms O’Neill.

“If the DUP or anyone else wish to exercise political power in government in the North of Ireland now or in the future, then the cost is to embrace a rights-based society and equal-partnership government, which works for everyone,” she added. “This would pave the way for the Executive to be restored.”

Later, after the party voted to drop its ban on entering government as a minority partner – opening up the prospect of a coalition with Fianna Fáil or Fine Gael – deputy leader Mary Lou McDonald said Sinn Féin would only enter government “to deliver for ordinary citizens”.

Ms McDonald attacked Fine Gael and Fianna Fáil as the parties of the elites, and said that Sinn Féin in government would provide public services, housing, fair taxation and a universal health service.

Although she mounted a series of strong attacks on Fine Gael and Fianna Fáil in her speech, Ms McDonald supported the motion to open the way to a coalition deal with one of the big two parties, as did most of the prominent party speakers last night.

More than 3,000 delegates are attending the two-day ardfheis at the RDS in Dublin, which culminates in Mr Adams’s televised address at 8.30pm this evening.