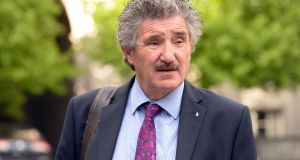 John Halligan: “There was no direction given but just gave us some advice. We are all in agreement that we should not travel.” Photograph: Cyril Byrne

Minister of State John Halligan has confirmed he will not pursue a planned trip to North Korea.

Mr Halligan met with the Department of Foreign Affairs this week to discuss the possible parliamentary visit to the country.

The Minister told The Irish Times he was briefed on the situation by departmental officials and was prepared to accept their advice.

Mr Halligan said: “It was a very informative briefing and the Independent Alliance will not be travelling.

“There was no direction given but just gave us some advice. We are all in agreement that we should not travel.”

Mr Halligan, Minister for Transport Shane Ross and Minister of State Finian McGrath had proposed travelling to the country to discuss peace with the North Koreans.

However the Department of Foreign Affairs publicly outlined its opposition to the visit and the proposal caused significant concern within the Independent Alliance.

Mr Ross confirmed the visit was cancelled but Mr Halligan reserved his position until he discussed the matter with the department.

A letter had been written to the North Korean embassy to see if a visit was feasible and a meeting was scheduled but this will now not take place.

The Minister of State also told The Irish Times he had written to the Department of Business to assess if he can pay a Workplace Relations Commission (WRC) award of €7,500.

The award follows a question the Minister asked if a woman she was married and how many children she had during a job interview.

The Minister said he had spoken to departmental officials informally about how repayment would work.

Mr Halligan confirmed he was willing to pay whatever legal costs arose and the fine but was unaware of the practicalities.

“I have made it clear that I would like to pay the fine and I will do my best to do that. The logistics and all that are still unknown.”

The WRC ruling said evidence given during the hearing – either by Mr Halligan or a human resources official on his behalf – was that the other two candidates for the job were not asked similar questions during their interviews.

The commission heard Mr Halligan asked a woman if she was married and whether she had children during an interview for the position of his private secretary.

The woman answered the questions, confirming that she was married and she was the mother of two children and she indicated their ages. In reply, the Minister observed, “You must be very busy.”