The CEO of Inner City Helping Homeless Anthony Flynn, has called for the director of Dublin’s Regional Homeless Executive to, “consider her position”, in the wake of comments made regarding “ad hoc” unauthorised groups supporting homeless services. 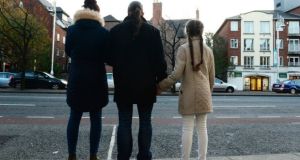 Homelessness was “a time of considerable stress, intensive at first then of less intensity but prolonged and just as potentially scarring”.

The long-term, negative impact of homelessness on children, particularly older children, is set out in a ground-breaking report published on Saturday.

Commissioned by Focus Ireland, the report says families placed in social housing after homelessness recover more quickly than those placed in the private rented sector, as the latter remained anxious about becoming homeless again.

Researchers Brian Harvey and Dr Kathy Walsh conducted in-depth interviews with 25 families who had exited homelessness between March 2014 and September 2016 for the report, Finding a Home: Families Journeys Out of Homelessness. It is the first such research conducted in Ireland.

Homelessness was “a time of considerable stress, intensive at first then of less intensity but prolonged and just as potentially scarring... Personal relationships and family discipline generally deteriorated.”

Among the biggest challenges for children were lack of certainty, lack of play space, overcrowding, boredom and reduced socialisation.

“Our son’s behaviour went out of control. There was nothing for him to do,” said one parent. Another commented: “ My daughter’s behaviour changed. She fought with me and her dad, which was unheard of. She cried a lot and acted out.”

In many cases “some of the issues related to being homeless only emerged for older children following the move out of homeless accommodation”.

One parent said: “Our 14 year-old didn’t do well in school [when homeless]. He didn’t study. There was no place quiet for him to study and he was too tired from all the travelling we had to do to get to school... Things are starting to improve but he has lost the good studying habits he used to have.”

The more resilient and resourceful families were better equipped to exit homelessness. Finding a home “greatly tested the social skill and personal resilience of each of the families interviewed”.

The most recent Department of Housing figures show there were 1,455 families, including 3,124 children, in emergency accommodation in September. So far this year Focus Ireland has assisted more than 300 families in exiting homelessness.