Permission to demolish Howl at the Moon nightclub quashed 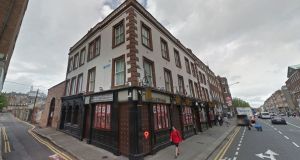 Planning permission to demolish Howl at the Moon nightclub (above) in Dublin 2 and build a 53-room hotel on the site has been overturned. File photograph: Google Street View

An Bord Pleanála has decided to overturn planning permission to demolish Howl at the Moon nightclub in Dublin 2 and build a 53-room hotel on the site.

The decision follows an objection from German Ambassador Matthias Hopfner, which was subsequently withdrawn.

A development company controlled by Paddy McKillen jnr and Matthew Ryan acquired the nightclub building for a reported €3.2 million last year. Their plan was for a six-storey hotel with a rooftop restaurant complete with outdoor terraces.

Mr Hopfner, along with two other interested parties, appealed Dublin City Council’s decision to give permission to the project in May. Mr Hopfner subsequently withdrew his appeal last August.

In its decision last week, An Bord Pleanála decided to overturn planning permission on the basis that the proposed development “would be incongruous in terms of its design and its excessive height, bulk and mass”.

It said this “would be out of character with the streetscape and would have an adverse impact on the setting of nearby protected structures”.

The inspector’s report noted the building “makes a positive contribution to the streetscape, by virtue of its decorative features and prominence in the streetscape”.

“The existing building adds to the architectural diversity of the area by virtue of its lower height, rendered facade and position forward of neighbouring buildings and I do not consider that these attributes should be seen as a negative and used to justify its demolition,” it said.

A spokeswoman for Mr McKillen jnr said he was “disappointed” with An Bord Pleanála’s decision, but that there are plans to lodge a new planning application for the site taking on board the inspector’s report. The application is due to be lodged in late 2017 or early 2018.

In an observation made to Dublin City Council before it granted planning permission last May, Mr Hopfner noted work on the redevelopment of the Irish headquarters of the Goethe-Institut, a German cultural body, was under way at 37 Merrion Square, and it would be “directly and negatively impacted by the proposed development”.

“I would ask the local authority to consider requiring a reduction to the scale, size and height of the proposal, as experienced from the rear, in order that the character of the gardens and mews structures to the protected structures on Merrion Square would not be unduly affected.”

The German embassy said it was not in a position to comment on the matter.