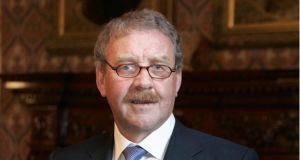 Michael Colgan: several women who had made allegations against the Gate Theatre’s former director have expressed concern about who will see any submissions. Photograph: Dara Mac Dónaill

The Gate Theatre is offering confidential counselling to former employees who allege that they were sexually harassed or bullied by its former director Michael Colgan.

An independent review of Mr Colgan’s actions is expected to be completed by January 2018, management said.

In a statement on Friday evening in response to queries from The Irish Times, the Dublin theatre moved to assure former employees that the investigation would be independent and confidential. Several women who had made allegations against Mr Colgan have expressed concern about who will see any submissions they make to the independent investigator. Others have indicated that they are pursing legal action against the Gate Theatre.

Two weeks ago seven women detailed allegations in The Irish Times against Mr Colgan of sexual harassment, bullying and frequent inappropriate touching inside and outside the workplace during their time there between 2009 and 2016.

In response the Gate set up an email address for former employees to disclose complaints. This was quickly followed by the announcement that Gaye Cunningham, an adjudication officer at the Workplace Relations Commission, would review Mr Colgan’s time as director.

On Friday the Gate said Ms Cunningham will contact “current and former staff members, current and former members of the board and affected parties, as well as any other persons who have spoken out on the record”.

Ms Cunningham declined to comment on Friday when contacted by The Irish Times except to say she had begun her work.

“The terms of reference include identifying any dignity-at-work [issues], abuse of power and related inappropriate behaviours and failings on the part of any person associated with the Gate,” the theatre said. It added that Ms Cunningham would “have full and final editorial control of the output of the review” and would make the report available to the Gate’s board and to the Arts Council in January 2018.

Harassment in the arts

Separately, representatives of the main Irish theatres, including the Gate, met with Minister for Arts Heather Humphreys on Thursday night to discuss harassment and bullying in the arts. In a joint statement the theatres said: “We strongly condemn sexual harassment and abuse of power in the theatre in Ireland and internationally. This kind of behaviour is always utterly inappropriate. Theatres, like any work environment, need to be safe spaces for everyone.”

It continued: “The welfare and wellbeing of everyone working in our theatres is of paramount importance. Therefore we wish to restate our collective commitment to ensuring that Irish theatres are safe, fair and equitable places for all those working within them.”

Mr Colgan has declined to answer questions from The Irish Times but in an article in the Sunday Independent last week he said he sincerely apologised to “anyone who was ever made to feel upset”, while adding: “My behaviour should not be equated with sexual crimes.”