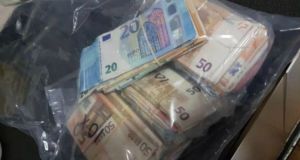 Images of cash found during the Netherlands search operation have been released. 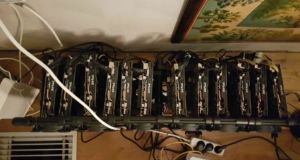 Images of a so-called Bitcoin mining rig found during the search operation have been released. Bitcoin is a virtual currency used for transactions conducted via the darknet, including the sale and purchase of illicit drugs. 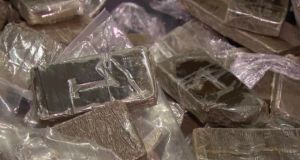 The authorities in Holland published photographs of cannabis (above), in several forms, that was among a 175kg consignment seized on Thursday.

Three Irish men arrested in the Netherlands during a major police operation against international drugs trafficking and money laundering have appeared in court in Amsterdam.

The men, one from Dublin and two from Limerick, were detained in raids on Thursday. A total of eight suspects were arrested, with Dutch and Belgian nationals among them.

Gardaí and the Dutch police believe the eight suspects were part of an international network used by the Irish-led Kinahan gang to source and transport drugs and launder the proceeds of drug dealing.

The three Irishmen have not been charged with any offences. However, their detention by the Dutch police has been extended to 14 days.

The criminal investigation into their alleged activities will continue during their detention.

Under the Dutch legal system, the men must then be brought before the courts again for their time in police custody to be further extended, or to be charged, or to be released without charge.

The Dubliner being held is a member of the Kinahan gang. He is originally from the south inner city but has had addresses in south county and west Dublin.

He has been targeted in arson attacks in Dublin in recent years. He also survived a murder bid, in a shooting linked to his involvement in the drugs trade.

He is in his 30s and has served time in prison in Ireland for serious drugs offences.

One of the Limerick men being held has been targeted by the Criminal Assets Bureau in the past over money laundering. He was served with a demand for more than €500,000.

His associates were also once caught by the Garda when retrieving a significant quantity of cash from a hiding place in rural Ireland.

The sum was one of the biggest ever seizures of cash in the history of the State at the time.

The Irish suspects were arrested in a fortified apartment in Amsterdam with a reinforced front door during 48 hours of police action in the Netherlands and Ireland.

The authorities in the Netherlands have also published photographs of cannabis, in several forms, that was among a 175kg consignment seized on Thursday.

Images of cash and a so-called Bitcoin mining rig (involving computer hard-drives) found during the operation have also been released. Bitcoin is a virtual currency.

The Garda and Dutch authorities suspect multi-million euro drugs transactions were being conducted in untraceable Bitcoin (which potentially could then have been used for other Bitcoin transactions, or could have been converted into cash).

A complex system of scrambling transaction records on the darknet makes the transfer of Bitcoin impossible to link to the parties involved.