Review – In The Name of Peace: John Hume in America

Time to recall pivotal role played by a patriot, and that rare breed – the virtuous politician

'In the Name of Peace: John Hume in America' is a new feature documentary by Maurice Fitzgerald about John Hume which reveals how his engagement with the US was a major catalyst in the journey to securing peace in Northern Ireland. 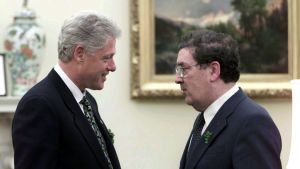 Then US president Bill Clinton and John Hume in the Oval Office at the White House on March 17th, 2000. Photograph: AFP/Corbis

Film Title: In the Name of Peace: John Hume in America

It would be overstating the case to suggest that John Hume has been written out of history, but as the SDLP have slumped and Sinn Féin have advanced we are beginning to lose sight of that dogged politician’s contribution. Maurice Fitzpatrick’s hugely professional documentary seeks to rectify that situation.

The film has an uncertain focus, as its twin titles suggest, In the Name of Peace: John Hume in America has much to say about the US influence on the peace process. Few documentaries can boast of contributions from two US presidents – Jimmy Carter and Bill Clinton. That duo join John Major, Tony Blair and others and the picture prods the complex emotions of the Irish-American lobby with some dexterity. But there is also much here that has nothing to do with those US stories. At times, it feels as if a more wide-ranging Hume documentary has been rudely hammered into a less comprehensive template.

No matter. The format still allows for a fascinating collection of intertwined stories. Seamus Mallon, whose relationship with Hume was often uneasy, offers generous praise and admits that his erstwhile colleague did not always take well to criticism. If you’re playing the Irish-doc drinking game you’ll know to take a slug when Bono appears.

The most telling contribution is, however, from the indomitable Eamonn McCann. “The Bogside has become a tourist attraction,” he groans. “I listened in to one of these guys giving schoolchildren from southern Ireland an account of a history of the Bogside, in which John Hume didn’t figure until the Hume-Adams talks.”

Nobody else could deliver those lines with such elegant disgust.

Keanu Reeves: ‘Grief and loss are things that don’t ever go away’
9 The guarded words of Trevor Rees-Jones
10