Famine and war took its toll, with Dublin’s wealth decreasing by two-thirds 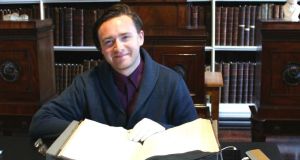 The full extent to which famine and conflict devastated Ireland in the early 14th century has been revealed for the first time.

Dublin lost more than two-thirds, Kilkenny and its hinterland half and Cork a third of its wealth following the invasion of Ireland by Edward Bruce of Scotland in 1315.

Bruce invaded Ireland on behalf of his brother, Robert the Bruce, to drive the Norman settlers out of Ireland. The invasion set off a vicious proxy conflict between the Scots and the English with the Irish natives lining up on both sides.

The invasion coincided with what historicans call the Great European Famine of 1315-1317 which was caused by a rapid cooling in the climate. It devastated the whole of northern Europe and its affects lingered for years afterwards.

The scale of devastation in Ireland is revealed in a series of 14th century papal tax records examined by Trinity College Dublin PhD candidate Christopher Chevallier.

The tax records measured the wealth of the different Irish dioceses based on the tithes collected at parish level. In the 14th century householders handed over approximately 10 per cent of their wealth by way of tithes to the Catholic Church.

Mr Chevaillier said tithes were a good proxy for the economy. He described the archives involved as “groundbreaking” because qualitative data about economy activity in medieval times was so hard to come by.

He also said the records had to potential to create an Irish version of the “Domesday book” - the comprehensive medieval record of property holdings in England.

His research would appear to be backed up by contemporary accounts which spoke of cannabilism and the theft of bodies from the battlefields.

The famine caused the various armies who were fighting at the time to pillage far and wide.

“All the armies became vicious because there was so little food for the soldiers,” Mr Chevaillier explained. “It is particularly devastating because you have the confluence of hunger and conflict.”

The damage done to Dublin during the Bruce invasion was particularly bad because locals burned their own produce and cannabalised their own dwellings for stones and timber to avoid a siege.

The Bruce invasion finally ended on October 14th 1318 at the Battle of Faughart in County Louth in which his army, weakened by famine and facing a much greater enemy, was routed. The research is being published to coincide with the 700th anniversary of the battle.

The research compared valuations by the Catholic Church between 1302 and 1307 before the Bruce invasion, and those taken around 1320. The church revalued the relative wealth of the dioceses based on the income they received.

These were areas largely controlled by Norman settlers. The research shows areas controlled by the Gaelic Irish, most notably Thomond (which corresponds with the modern mid-west) suffered much less devastation.