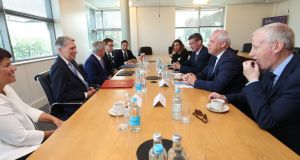 Preventing an “east-west border” between Northern Ireland and Britain is as non-negotiable for the UK in the Brexit talks as avoiding a “North-South” Border is for the EU, Britain’s chancellor of the exchequer has said.

During a rare visit to the North, Mr Hammond said he did not agree with Tánaiste Simon Coveney’s view that the British government could not afford a “no deal Brexit”.

“I think there is no doubt that Britain would be better off with a deal than without a deal. But I don’t think we are sliding to towards no deal,” he said.

Mr Hammond said the recent British White Paper, which sought to reconcile how to avoid borders, was a “constructive move forward” and could be engaged with by both the British and EU.

“I very much hope over next few months we are going to see rapid progress towards a shared vision of what the future relationship can look like and of course putting in place the Irish backstop arrangements which are a crucial part of the overall package.”

Mr Hammond said he was sure that the long-running row over the possibility of a hard Border was not being “hyped up”.

“One of the challenges we have had over the past few months is getting the EU to understand that no east-west border is as non-negotiable a part of this picture as no North-South border is for them,” he told reporters.

“The no east-west border is equally non-negotiable from the point of view of British Conservatives and unionists. I certainly would not be prepared to sign up to any solution that involved an east-west border between Northern Ireland and GB.”

As a Remainer during the EU referendum debate, he acknowledged there were tensions on Brexit within the Conservatives but did not think that it would lead to the implosion of the party. He said “no one disagrees with the direction of travel, that we are leaving the EU and seeking to get the best deal we can with the EU”.

On the restoration of powersharing, he said that during an earlier meeting with financial services executives in Belfast he “sensed frustration and a concern that if the situation were to go on it would exact a toll on inward investment and confidence by foreign firms who are investing here”.

He said US chief executives of firms based in the North also told him it was “very difficult to explain to their corporate leaders in the US what it means and how it works to be in a place that has no political governance”.

“We have to go forward, we have to get back to the powersharing arrangements that have delivered such progress over past 20 years.”

Mr Hammond’s visit to Belfast and Derry raised suspicions among some nationalists that an attempt was being made to deflect attention from the British-Irish Intergovernmental Conference, which took place in London on Wednesday.

The DUP had described the conference as a “talking shop” and some suspected Mr Hammond’s arrival was a sop to the party, which is keeping Theresa May’s government afloat.

The chancellor denied this was the case and said he was there to announce £12 million in funding for a Bombardier factory and also to talk to financial services executives and to meet academics at Ulster University in Derry.

Mr Hammond said he had invited “a city deal” bid from Derry whereby the local council, university and businesses were given the chance to submit plans to the British government on their priorities for economic growth in the region. The British government already is investing more than £1.6 billion in city deals in Scotland and Wales and is in negotiations for a Belfast city deal.