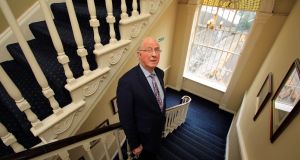 Brendan Halligan: “The parties that were fashioned a century ago are being consigned by events to the dustbin of history.” Photograph: Nick Bradshaw

There is no rationale for the continued existence of political parties of the centre left and centre right in Europe in the face of attacks from their more extreme counterparts, the former general secretary of the Labour Party has said.

Speaking on the subject of European values at the MacGill Summer School, Dr Brendan Halligan, who is also president of the Institute of International and European Affairs, said battle lines are being drawn up between those who believe in democracy and those who do not.

Identity and not class is the main cleavage within society today, and this is being exploited by populist parties on the far right and the far left.

In the face of this political parties of the centre must unite around their shared European values, he said.

“Simply put, there is no longer any sustainable rationale for the separate existence of Social Democratic and Christian Democratic parties. What they have in common is more important than what divides them.

The realignment of democratic forces is the only way to repel populism, and failure to do so is a sure guarantee of defeat

“At base they are democrats, as their names testify, and if democracy is to be saved from attack they will have to coalesce around their common allegiance to the values on which Europe is founded rather than continuing as opponents in an outmoded struggle.

He continued: “If that is accepted then it follows logically that existing parties are redundant, and I say this as a former general secretary of the Labour Party in the full knowledge of what I am saying.

“The parties that were fashioned a century ago are being consigned by events to the dustbin of history. It’s sad but true. The realignment of democratic forces is the only way to repel populism, and failure to do so is a sure guarantee of defeat.

As an example he pointed to the victory of Emmanuel Macron’s insurgent, centrist La République en Marche in France which attracted disaffected voters from both the left and right.

“Nothing happens, said Monnet, without the right man and nothing endures without the institution. Macron made it happen and has built a political movement that may well endure in France.”

We have to put second-order issues aside and prioritise first-order issues, namely the protection of democracy

He pointed out that in 1900 there wasn’t a single full democracy in the world. In 1945 only 15 of the 51 founder nations of the UN could be credibly classed as democratic.

Dr Halligan’s suggestion that centre right and left parties should unite was met with a heated reaction from trade union activist Paddy Healy who said the idea has already failed.

The adoption of Fine Gael policies by the Labour Party has “led to virtual extinction of the Labour party” which currently stands at 2 per cent in the polls, Mr Healy said.

Dr Halligan responded: “We have to put second-order issues aside and prioritise first-order issues, namely the protection of democracy.”

According to Aziliz Gouez, a political analyst and former speechwriter for President Michael D Higgins, the biggest danger to liberal democracy in Europe comes from the regime of the far-right leader of Hungary, Viktor Orban.

Mr Orban’s regime has eroded the checks and balances in his country by attacking the judiciary and appointing a supporter to the role of chief prosecutor. This has seen the number of investigations of political corruption plummet, she said.

“Hungarian public space is saturated with anti-Western, pro-Russian messages” due to the centralisation of Hungarian media, she said, adding that the national broadcaster and all major newspapers are under the control of oligarchs who support the Orban regime.