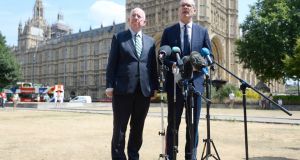 Minister for Justice Charlie Flanagan and Minister for Foreign Affairs Simon Coveney during a press conference on College Green in London, following a meeting of the British-Irish Intergovernmental Conference. Photograph: Kirsty O’Connor/PA Wire

The British and Irish governments have agreed to establish a formal structure to facilitate high-level ministerial contacts after Brexit, when ministers from the two countries will no longer meet regularly in European Union councils.

The decision to ask officials in London and Dublin to explore options for such a structure came during a meeting of the British-Irish Intergovernmental Conference (BIIGC) on Wednesday.

“British ministers and Irish ministers simply won’t be meeting as frequently in the same way as we have over four decades,” Minister for Foreign Affairs Simon Coveney said after the meeting. “And so we have instructed senior officials to come up with definitive proposals on how an Irish government and a British government in the future can have a structured and interactive dialogue at cabinet level in the same way as France and Germany have for example...”

He continued: “It also sends a very clear signal out to the public in Britain and Ireland that Britain and Ireland are going to remain very close in terms of political contacts and partnership i6n the future, regardless of some of the challenges that we face.”

The meeting at the Cabinet Office in Whitehall was the first since 2007 but the conference, which was set up under the Belfast Agreement as a forum for Britain and Ireland to discuss east-west issues, will meet again in the autumn.

Before the meeting, unionist politicians warned the Government against “meddling” in matters that were the preserve of London and the devolved institutions in Northern Ireland. But Mr Coveney said they had nothing to fear.

“We do not deal with devolved decision making. What we’re about is reinforcing the message that the British and Irish governments, as co-guarantors of the Good Friday Agreement, are working together through the structures of that agreement,” he said.

“We are doing what we can to provide an environment where political parties are able to interact again, hopefully with a view to restore the devolved government so that people in Northern Ireland can have their political decisions made by the people that they elected.”

The meeting focused on security co-operation, legacy issues and political instability in Northern Ireland but avoided the biggest bilateral issue between Dublin and London – Brexit.

Speaking after the meeting, Mr Lidington said that, although Britain did not want a no-deal Brexit, it was planning for that eventuality.

“You have to put vim and vigour into it because you want to make sure that you have thought through all potential problems and you have got a contingency plan, which in that situation would work and deliver the best outcome in those circumstances,” he said.

Mr Coveney played down the likelihood of a no-deal Brexit, suggesting that Britain and the EU should focus on finding solutions to unresolved issues in the negotiations. On the issue of the Border backstop, he noted that Britain was seeking to separate the customs element from the commitment to regulatory alignment and stopped short of rejecting the idea.

“There are some challenges with that and I think it’s important to say that. That is why we need to get the negotiating teams now into a room to discuss what those challenges are and how we might be able to overcome them,” he said.

“I think it’s possible to get a backstop agreed, put it that way. But I think the detail of that it probably wouldn’t be helpful for me to comment on in advance of the two negotiating teams really thrashing it out over the next few weeks or so.”