We Are Church Ireland supports LGBTQI rights, but received no response to application 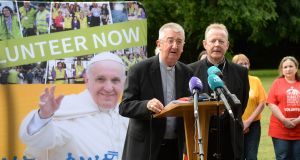 Archbishop of Dublin Diarmuid Martin and Archbishop of Armagh Eamon Martin announce the publication of Pope Francis’s itinerary for the World Meeting of Families 2018 in Ireland. Photograph: Dara Mac Dónaill

A liberal lay Catholic group has accused the organisers of the World Meeting of Families (WMoF) of discriminating against them because of their support for women’s rights and equality for gay and lesbian couples.

We Are Church (WAC) Ireland spokesman Brendan Butler said it submitted an application last February “with the required deposit for an exhibition stand in the main hall of the RDS during the pastoral congress” which takes place between August 23rd and 25th.

To date, they “still have not received the courtesy of a written response,” he said.

“Almost fortnightly, we have rung the WMoF inquiring about the status of our application. The constant reply has been, ‘Yes, we received your application but it is on hold,’” he said.

“On the 25th of May we sent a registered letter to Fr Tim Bartlett, secretary general of the WMoF and copied it to Dr Diarmuid Martin, Archbishop of Dublin and president of WMoF, asking for the courtesy of a decision on our application. Both these letters were also ignored,” he said.

“Still having received no decision by the middle of July, and with the WMoF’s own deadlines having expired, we finally cancelled our deposit,” he said.

“The lack of the most basic courtesy in dealing with our application” showed “a serious lack of respect to WAC Ireland and is a total contradiction to the advertised ‘all are welcome’ inclusivity of the WMoF,” he said.

He accused WMoF of continuing “with its stealth tactics used already against gay people by erasing pictures of LGBTQI couples from its official brochure earlier this year and deleting one inclusive minute from the video of Bishop David O’Connell”.

The “refusal by the WMoF to engage with We Are Church Ireland and in effect to reject our application shows a closed and exclusive mentality which contradicts Pope Francis’s constant calls for dialogue in the Catholic Church, ” he said.

He accused WMoF of treating the group in a “discriminatory manner” and believed this was “because WACI stands for the full equality of women and LGBTQI people and greater democracy and transparency in our Church”.

In response, WMoF spokeswoman Brenda Drumm said WAC Ireland was “one of a number of organisations who are on a holding list in respect of exhibition space at the WMoF 2018 pastoral congress. Many of these groups are on hold because they do not meet our stated criteria which were provided to them at the time of their application.”

She said “had there been more space available we may have been able to allocate spaces to those on hold on the list. At this point it seems very unlikely that there will be any spaces left to allocate to those who fell outside the criteria. We will be writing to these groups to inform them of this in due course. Any deposits that were paid will be returned in full.”

Among criteria employed in accepting such exhibition applications forms by WMoF organisers were that they came from “Church-approved organisations”involved in “supporting family and marriage on behalf of the Irish Bishops’ Conference” and were from organisations involved in “promoting Catholic social teaching”.